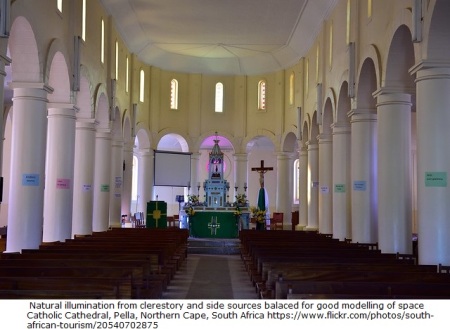 WINDOW LOCATION: A window with an interior wall at a right angle distributes the light well, reducing the glare, compared to a centric window that causes contrast and so glare. A window in a wall with interior colour of lighter shade seems less contrasting than a window in a dark coloured wall.

Chamfered or splayed sides of the window opening over the inner edges creates planes of intermediate brightness and thereby dispersion of illumination. Similar chamfering of the outer edges enlarges the sky component and thereby greater intake of illumination. A chamfered sill illuminates sections close to the wall. Windows located high in a wall or in the roof trusses and clerestories result in deeper penetration of light and better distribution. A rule-of-thumb is that the depth of daylight penetration is about two and one-half times the distance between the top of a window and the sill. Light-coloured floors allow daylight reflection to the ceiling section.

Brightness is a perceived phenomena or a subjective attribute of light, because the sensitivity of the eye decreases as the magnitude of the light increases. It cannot be measured, but checked as between very dim and very bright (brilliant). If the luminescence of a viewed light source is increased 10 times, viewers do not judge that the brightness has increased 10 times. The relationship is, in fact, logarithmic: the sensitivity of the eye decreases rapidly as the luminescence of the source increases. It is this characteristic that allows the human eye to operate over such an extremely wide range of light levels. 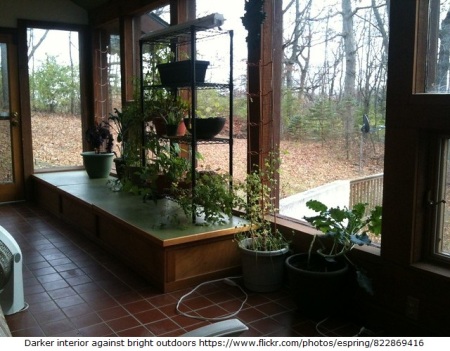 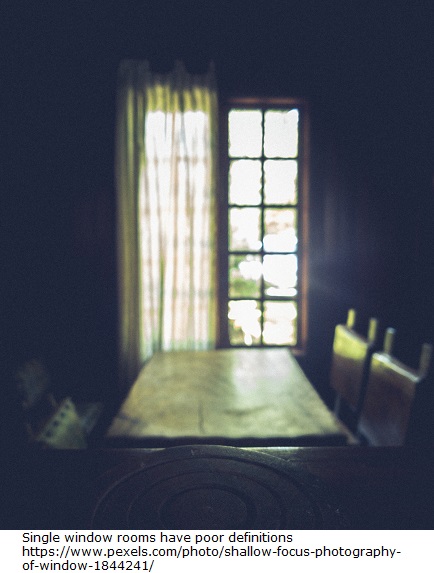 MODELLING: For a designer ‘modelling of objects is as important as their functional aspects are. Opening systems like windows, skylights, clerestories provide the necessary natural luminescence (brightness or intensity) to show the form, colour and texture of objects. Objects are perceived mainly due to the direction of light and its ever-changing nature. These are often enhanced, contrasted or subdued by reflectance and also by artificial illumination. Corbusier has used planes strategically placed against openings to model the interior spaces. The size and intensity of the luminance determine the shadow density and so affect the ‘modelling’.

For visual effectiveness, some contrast in brightness levels is desirable in a space. Dull uniformity in lighting leads to tiredness and lack of attention. Windows on multiple orientations and height levels must be combined to produce the right mix of light for interiors. 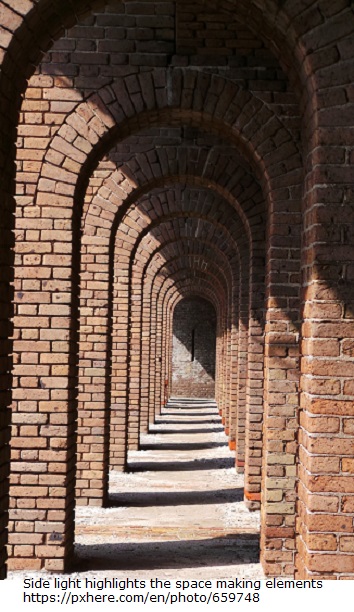 Light from a single bright source over emphasizes the shadows and textures, and therefore creates a model that may be all right only from certain points of observation. Light from a large diffuse source softens the texture and dulls the neat delineation of the object (modelling), but permits mobile objects to be seen. Light from multiple directions and if in different intensities accentuates differences between different planes of the object. However, a very large diffuse source eliminates the texture. Light which comes from a large top source like a roof, seems shadow-less and so featureless, compared to light from a side, which enhances the horizontal dimension and creates a definition.