Sensorial perception is finite, as limited by our body capacities. Body capacities vary from person to person and also depending on many other personal factors such as age, sex, moods, past experiences, sequences of happenings, etc.Perception is cumulative and to an extent mutually compensative process. It also occurs as congregation of several effects. We may not be able to isolate few parts of it. As for example, Smell and Taste often occur together.

The sensory nodes have FOUR important characteristics that they have specific Location, Capacity and Multiplicity and the Duration. The Locations of the sensorial nodes provide information about the directionality, and encourages discrimination. The Capacity of the perceptive nodes is range bound which permit selections while providing comfort, sense of survival. Beyond the range bound capacity of the perception faculty, the perception process gets transmitted to other modes allowing a different facilitation. The Multiplicity of nodes gives a sense of scale and referential e positions. The Duration gives a temporal scale. In other words The Location, Body capacities, Multiplicity and duration, all together and individually endow a Geo-Spatial identity.

There are abnormal sensorial perceptions also. These arise from the Location related misinterpretations, Physiological deficiencies, differentiated perception of multiple nodes and time related intensifications and diffusions.

Perception of a space happens in an environment where both the space and perceiver exist. Perception of space is also becoming aware of the environment, organisms and objects. Perception nominally means sensorial recognition, but could also be realization through other means. Understanding of a situation, acceptance or confirmation is also part of the process of perception. 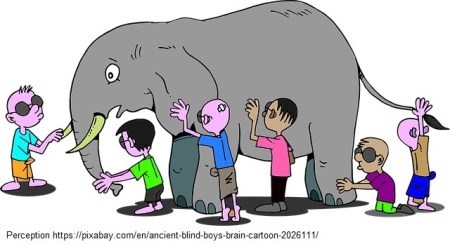 The causative factors of the environment manifest as a change in the space. We perceive the changes through the sensory nodes of the body. For a given event in the environment, thousands nerve impulses are generated and conducted to the central nervous system. Since these impulses travel along a path where many different nerve fibres pass at slightly different times, they form a pattern of input to the central nervous system. No matter how finely tuned, our sense organs are we cannot pay equal attention to all the stimulation at the same time. This is the basis of our sensory experience of the event. Sensory qualities are generally comprehensible on the basis of mechanisms within the receptor organ, whereas realization of object and event perception entails higher activity of the brain.