A wall is a planner structure, generally vertical, with a proportionately narrow thickness in comparison to its height and length. It is a barrier system, like fences, barricades, partitions, etc, and used for dividing or enclosing a space. Its most distinguishing function has to bear the load. It bears its own weight -the self load, and also other imposed loads of the super structures or sideways thrusts. Walls ultimately transfer all the loads, own and imposed loads or thrusts to the earth. One of the most efficient load transfer systems to the earth is in perpendicular direction to the gravity. As a result, in all structure compositions, the vertical walls predominate.

Imposed loads on walls emanate from other structural systems of the buildings, such as floors and roofs, beams, services, etc. and from the occupancy of these systems, like ‘live’ loads of people, flora, fauna, goods, storage utilities. Thrusts from within the structures are transferred by the walls to other bearing elements, or resisted and converted into a gravity bearing vertical component. These loads include from arches, beams, vaults, etc. Thrusts also bear upon the wall due to the lateral resistance provided to other elements such as water, grains, sand, soil, etc. and retained liquids or gases. Walls also endure pressures arising due to dynamic movements of live loads and shifting dead loads, earthquakes, and energy vibrations of sound, wind, etc.

Walls carry distributed loads, but frequently loads concentrated at a point induce local stresses and failures. Walls also fail, under excessive distributed loads, at its weakest section, get crushed or deformed depending on its homogeneity. When a wall has width equal to or less than its length, it becomes a column, and loses its meaning. Moreover, a wall that has a height equal or less than its width, remains an in-fill course or a layer only. Walls without any external down bearing imposed loads are called partition walls.

A wall carrying only side-thrust is called a retaining wall. A wall which carries the load of upper structure and also retains earth is an abutment wall. A gravity wall resists the side thrust of retained material by its dead weight. Gravity walls primarily have a trapezoidal section, with wider part forming the base. Cantilever retaining walls have ‘L’ or inverted ‘T’ section. A buttressed wall has additional intermittent pieces of lateral walls on the open face, to strengthen the mass. A counter-fort wall has a similar system (often as a structure in tension) on the inside or the loading face. 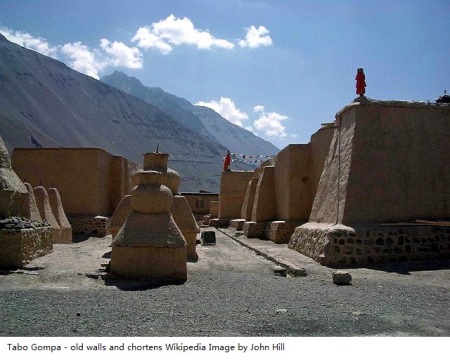 Walls as barriers resist variety of forces or energies. A translucent to opaque wall can reduce light transmission. A wall of an absorbent material and geometric configuration is used in attuning sounds. Latticed walls as barriers filter out select elements. Small height walls are used as compound or estate walls and as parapets. Dispersed vertical linear elements used as non-continuous barricade function like walls. Curtain walls are rigid membranes that envelopes a building to protect it from winds and rains and many instances bear the surface shears.

Walls are ‘loaded’ along and across the width section, and sometimes along the length-section. To bear a load, a wall is expected to have adequate surface cross sectional area in a plane parallel to the gravity. These surface component are made of width and length of the wall. Theoretically, a wall can have an infinite length and single size module of width. Nominal walls however, are required to bear a variety of loads, thrusts and stresses. So walls need some sectional depth, depending on the integrity or homogeneity and strength of its materials, in addition to the geometric formation and composition. Height of a wall is a finite element, though theoretically a wall could be infinitely tall. A tall wall, proportionally, turns into a slender structural entity. Wind and other vibrations over the surface of a tall or slender wall are random (stochastic) motions. These cause dynamic effects in many different directions. So even if depth (thickness) of the wall due to high integrity of material, composition or geometry, can bear the loads, the transmission of loads to the ground is not harmonic or consistent. 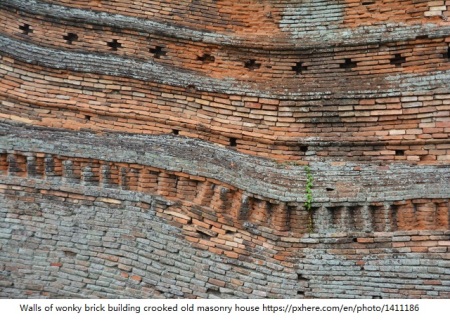 Walls of space vehicles and stations in outer space have few superimposed loads on the walls (once far beyond the nominal gravitational zone) however, if gets converted into stresses. The stresses ultimately result into some form of kinetic energy disturbing the equilibrium of the craft or station. To maintain the equilibrium (position and location), occasionally course-correcting boosters are fired.

Openings like doors and windows, and provisions like niches, alcoves, weaken a wall. For reasons of load-bearing capacity of a structure, openings at lower level must be fewer of smaller width. Lower sections of structures, however, have lesser solar exposure, so more openings are required. Openings are placed one above the other so as to leave uninterrupted vertical wall masses to transfer loads directly to the ground.