Singeing is a technique of controlled burning, charring or scorching the surface of a material. There are three important aspects of the process 1 the heat is intense, 2 the application of heat is of short duration, and 3 the affectation is not deep, but only surface based. Since prehistoric times the process has been used for many purposes. It was first created to burn of the skin hair of humans, and also bristles off the carcass of a pig or fowl in preparation for cooking.

Singeing was perhaps better method for trimming scalp or body hair for personal grooming then using a flint edge, however, sharp it may have been. For ritual activities charring skin with a burning wood stick or red-hot metal was very common. The burning wood rubbed into the skin, scorched it and allowed deposition of ash and carbon to colour it, as a form of tattooing.

According to Herodotus (500 BC), aristocrats, tattooed themselves to show their social status. A Germanic barbarian tribe the Goth used tattoos to brand their slaves. In later periods Romans tattooed slaves and criminals. In China hot stamping of wrongdoers was a painful punishment and lifetime branding. In some tribes scarring the abdomen of women is used to denote her ability to tolerate pain, maturity and willingness to be a mother. Red hot cutting tools have been used to circumcise the penis, as a sterile procedure. 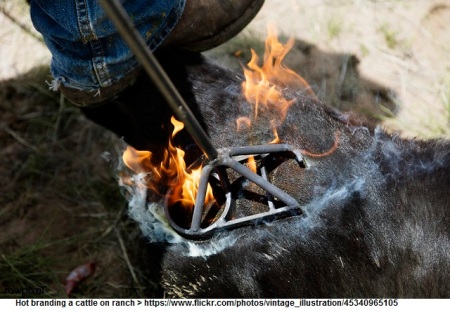 The word brand derives from Old Norse brandr = to burn. The word brand originally meant anything hot or burning, such as a firebrand. It may have its origin in the Dutch/Flemish word for a house or forest fire (brand), which is brand. The practice of placing a burn-mark over processed leather by tanners, over meat and cheese by farmers, was hot stamping. The same was perhaps followed by textile producers and processors. During Henry VIII period, a person who was found guilty for felony or murder was marked with the letter A on the thumb. The term brand-new is fresh from the fire, referring to items freshly tempered or stamped by fire, such as food. 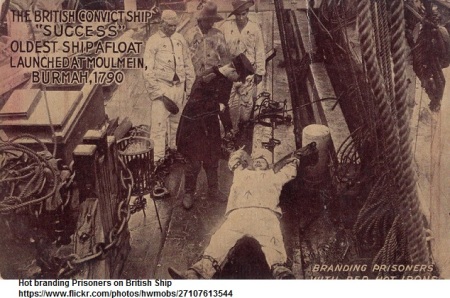 The heat stamping of livestock to identify ownership is of very ancient origins. Symbols used for brands were part of the magic spell. The branding iron was an iron rod with a mark. Nowadays less traumatic super-chilled (cooled by Nitrogen) iron are used for branding. 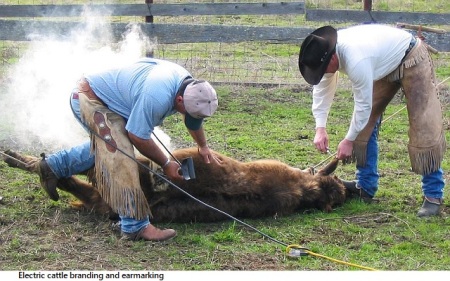 Singeing is used by parlour to burn and shrivel hair over eyebrows and ears of males members and over the lip and neck-backsides of ladies. For these process, earlier candles were used to burn the hair and douse it immediately with a wet towel. It is now done with cauteries and laser instruments. Singeing is supposed to seal cut ends, close the follicles, and retarding the fresh growth.

Cauterization is used in surgical procedures to seal of the end of minor blood vessels during surgeries. It is also used by troops to seal off the bleeding wounds in field emergencies. It was once done by red hot stamping and now by electric sparking instrument. Lasers are used in a very similar procedure to remove cataracts from eyes. 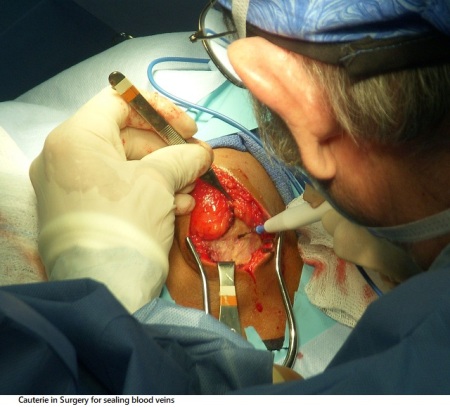 Tarsia or Tarsiatura is technique of colouring wood surfaces by singeing and staining. It was used to create mosaic patterns in woodwork, in 15th C and later, in Italy. Controlled singeing created minor colour variations over walnut wood surfaces, due to burning and carbon deposition. Scrolls and arabesques, and sometimes architectural scenes, landscapes, fruits, flowers, were created by arranging or inlaying (marquetry) pieces of wood of different colours and shades. Tarsia technique was used for decorating the choirs of churches, backs of seats, in wainscotting (panelling) and for door panels.

Singeing also called gassing, is applied to both yarns and fabrics to produce an even surface. In case of yarns it may seal or trim the loose or protruding fiber ends, or deform or crimp it, giving a new textural feel and behaviour. In case of fabric it may fuse the synthetic component, loosen the stresses of weaving, smoothen the surface and increase the lustre. Singed fabrics soil less easily than non-singed fabrics. Singed fabrics allow printing of fine intricate details. When cotton fabrics are singed, it increases the wettability and gets better dyeing. 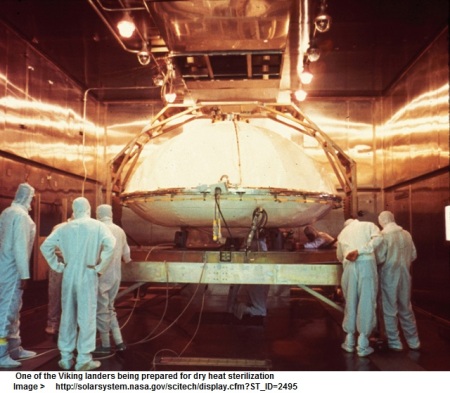 Heat setting is used in the textile industry to give fibres, yarns or fabrics dimensional stability, and attributes like higher volume, wrinkle resistance or temperature resistance. It is also used for posting creases in garment making.

Singeing or Spot heating by blow torch or very narrow flame helps in formation of enamelling of jewellery. Ceramic slip colours or oxide compounds are thin layered in micro receptacles and spot burnt to form an enamel or ceramic. This technique is also called Cloisonné.