The words ‘Carpets, Rugs, Durries, Floor Spreads and Heavy Tapestries’ are often used synonymously. The quality, the sizes and the uses differentiate one from the other.

Early (pre 1900s) Carpets, Rugs, Durries, Floor Spreads and Heavy Tapestries were traditionally made for specific purposes and clientèle. Some of these were used as table covers, and floor spreads were hung. With industrial revolution, looms were automated and users increased manifold. The sizes, yet varied from country to country, and for the niche markets being served. The carpets and other items were earlier sold at places of production to tourists, but now vast quantities were sold in major commercial centres of the world. 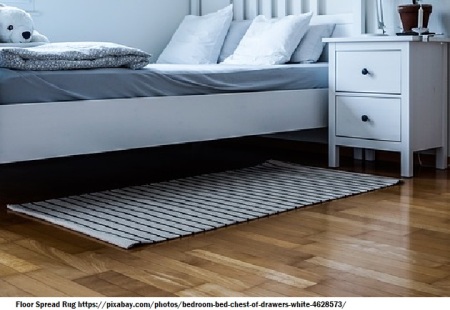 Carpets are larger, nearly cover the room space or are extended ‘wall to wall’. Modern day carpets are made heavier, stiffer and softer, by the backing materials system. Some backing systems are fixed to the back face of the carpet, whereas others such as soft padding are laid on the floor. Backing system often include a static discharge network with earthed wires. Some of the pile and tufted carpets can have very heavy body construction, and may not require backing. Carpets either remain on the floor due to gravity, non skidding backing surface, or the large extensive surface. Most carpets are, however, affixed with carpet tacks or hooks at the periphery or by adhesives. 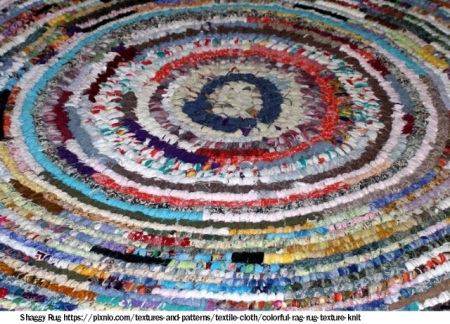 Rugs are smaller and nearly similar to carpets in terms of constitution. Rugs are simply spread on the floor, without backing or padding. Rugs being thinner and smaller can be rolled up. Rugs are also called throw-rugs because by throwing up in air one can unroll and spread it on the floor. Rugs are floor-spreads placed at specific locations within a room. Rugs are chiefly used for under the feet comfort. Rugs are also used to create places of interest or focus. Rugs are often laid over the carpet for the same reason. Rugs are spread over railings or parapets or hung on the walls. Rugs are thinner and simply reversing it dust can be removed. Rugs are formed as circular, elliptical and diamond shaped. The material is cut from larger woven material, and the edges are seamed with stitches, often with additional borders. Durries are thinner than rugs. Durries can be folded up to 4/6 folds. Durries have tied weft ends or stitched edges. Durries have a simple weave and patterns are generally identical on both the faces. Traditional durries were made from waste, carded or combed wool, cotton or jute of small length or staple fibres. The coarseness of the yarn provides a dull finished surface. Durry could be very small 500x 500 mm (in India called Aasan), for one person to seat during religious ceremonies. Durries with finer cotton fibres are called Shetrunjees -Satranji (India). These are small enough for a person to sleep (800x1800mm) and larger enough (2700x4500mm) to seat 20 people.

Floor Spreads are made from cotton yarns, thin grasses and reeds, and synthetic flat yarns (such as polyester or Polypropylene). Floor-spreads are used for floor level dining, seating and sleeping. Reed floor-spreads, are called Chatais. Chatais are used as under spreads for mattresses, as prayer mats, dead body covers for burial and as hung screens over passages and openings. Modern day floor-spreads are non-woven mats of polypropylene fibres. Foamed base Rexine and other extruded composites.

Carpets of Asian countries came to Europe after 11th C. These were very rare and precious items to be placed under the feet. Carpets were display items as table covers and wall hangings. Persian carpets are categorized as for Farsh or floors, (5500x2500mm) are the larger units placed at the centre. This is flanked by two runners or strip carpets called Kanarehs, (5000x900mm) used for walking. The end piece of three carpet arrangement is called Kellegi, (3700x1800mm). Other then these are nomadic-rug (Qa-licheh=small rug) or carpets (called Klim or Saumak), and prayer spreads called Namazik.

Modern loom carpets are 12 Feet (3.7 m) and 15 feet (4.6 m) in the USA, and 4.0 and 5.0 Mts in Europe. Carpet tiles are cut from woven material or non-woven pressed fiber sheets. The edges are seamed by stitching, adhesives or heat-fused. Commercial sizes are 400x400mm. For very large spaces like halls (greater than 3.5mts) pieces of carpets are seams joined by stitching or adhesives.