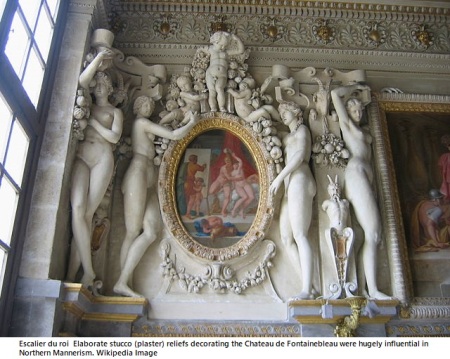 Stucco work has been interpreted as architectural plaster work, surface texture rendering, painting technique, ornamentation body and sculpting material. It has been also used as a wet ground for fresco painting and dry gesso surface base for painting. Stucco creates a dull or matt surface, so in recent periods it has been used for Calcimine or Dry Distemper and Oil bound Distemper (OBD)  painting systems. 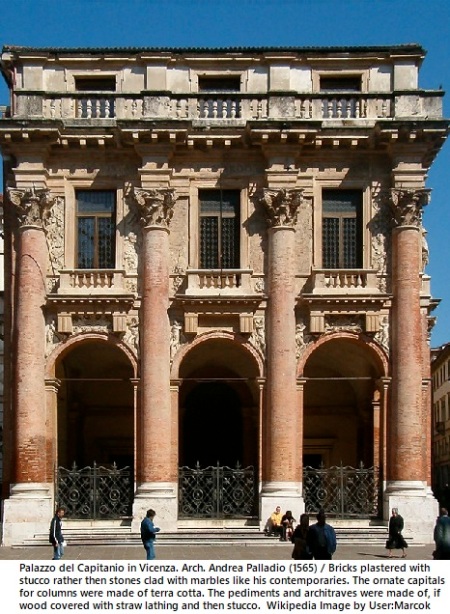 Palladio built his projects from bricks plastered with stucco rather then stones clad with marbles like his contemporaries. The ornate capitals for columns were made of terracotta. The pediments and architraves were made of, if wood covered with straw lathing and then stucco. He avoided using, the then popular tapestries, to cover the interior walls and instead applied frescoes. 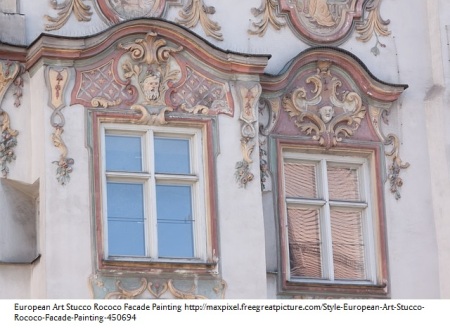 The varied interpretations across ages and cultures relate to the different techniques, materials and purposes, but all relate to surface rendering system. It is now often used for substantial coating systems that are applied with textural effect, convert into a textured formation, or allow ‘work’ post application. These coating systems are based on polymeric emulsions (or Latex systems, as known in USA).

Stucco work has been persistently used for interiors, but more diversely on exterior surfaces. In interiors stucco was a surface forming system over which variety of coatings (such as Fresco, Encaustic, Oil, Acrylic) and mural making (such as glass, ceramics, inlay) techniques were applied. On exterior face it was used as a surface rendering (texture) system like for sculpting decorative motifs, figurines and statuettes, and for formation of applique architectonic elements (such as pilasters, tympanums, pendants, pediments, cornices, column fluting, pillars’ heads and bases).

Stucco-work began as a wall coating system, probably to rejuvenate the soot-covered walls (blackened due to oil lamp lighting and indoor fires’). It provided a smooth surface over a variety of wall surfaces such as adobe, reeds, brick and stone. Examples of stucco-work occur in the Aztec architecture of Mexico, Egypt, Sumerian buildings and Greek buildings. Romans erected masonry structures, often with recovered materials from ruins of earlier age buildings. These walls were of random pattern, and required plaster as well as textural renderings. For faster finishing of vast buildings, stucco was ideal system for interior and exterior work. With little craftsmanship it provided ‘sculpted and decorative’ artefacts for middle class to replace marble and other stones.

Stucco is a three-dimensional surface ornamentation, which can be painted, receive other embellishments and easily repaired. In stucco work the materials employed have little importance, but the craft of sculpting is important. It is called as hand-modelled plaster work, as against later day Gypsum plaster work, which is more likely to be cast moulded works. Stucco, by the early 18th C became relatively expensive due to the concept of hand-modelling sculptural work. Stucco craft gained the complexity in Baroque period. In parts of Europe the stucco continued to be used through 19th C.

Stucco work reached new heights during Baroque period. Renaissance period provided smoother stucco surfaces in buildings to contrast the rusticated stone’s corners of openings. Post Renaissance period saw festoons and medallions of stucco on exterior walls. During Gothic period stucco work applied to wood a lath lattice was used for creating intricate ceiling patterns. Walls had cornices, freezes and panels over wood base. It was also realized that a plain wood wall was darker in colour and was susceptible to fire on the other hand stucco or gypsum-covered walls could be painted by water-based coatings (lime-wash, calcimine, distemper, etc.) and, these were fire resistant.

The basic ingredient for stucco work has been Lime, with addition of Gypsum and marble dust. Other reinforcing additives were hair, fibres, stone chips, etc. Gypsum was costly material, yet it was used with marble dust for imitation marble finishes called Scagliola. Since industrial revolution Portland Cement is being added, and in last 50 years polymeric binders are included. 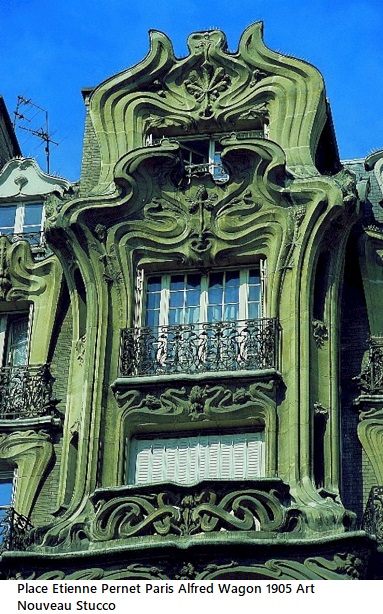 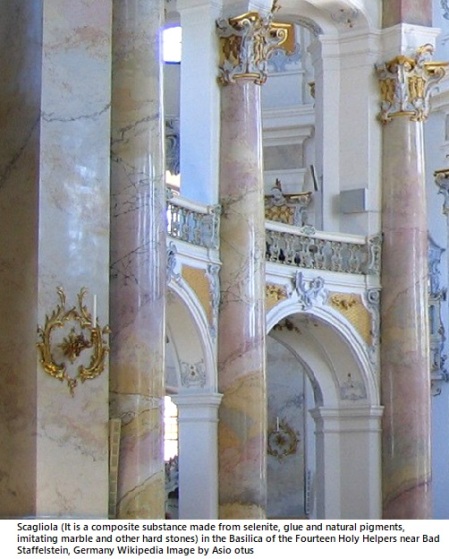 Stucco and Plaster work have overlapping interpretations. Plaster is comparatively planer work, created from Gypsum, Lime or Portland Cement and applied for surface leveling and waterproofing. Stucco can have the same materials but applied for creating designs, patterns and statuettes, on internal and external surfaces. The base surface could be structural elements like slabs, walls, and framed or latticed work. Stucco were once created from slow setting lime or gypsum but nowadays could have chemical and polymer binders. High bodied paint formulations applied with texturing tools are also used.