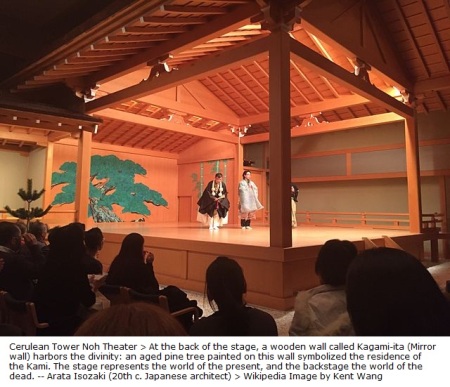 A performance stage consists of many different types of curtains, screens, banners, barriers, dividers and partitions. These are used for covering-hiding sections of the stage, modulating shape and size of the performance areas, create real or make-believe effects, divide the performance space into physical or metaphoric segments, create gaps for entry-exit, allow preparations for the show, attune the stage acoustics, and modulate the illumination in terms of brightness, colour, etc. 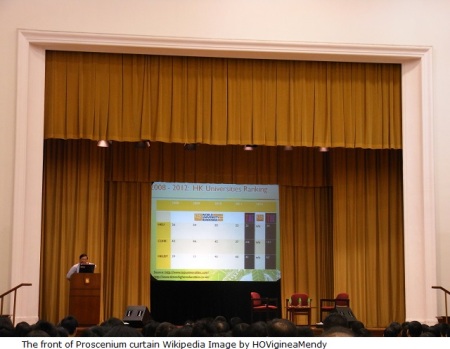 One of the main curtains on the stage is the Proscenium Curtain. These curtains are hung just a little away from the edge of the stage, and just inside the parabolic sound reflector over front section of the stage. This is also called main act curtain, or a grand drape. Its fabric is heavier and well articulated and decorated. Its heavy fabric-weave acts as a sound barrier between the stage and audience section. The fore, space is used by the announcer, programme director-producer or Sutradhar (Sanskrit for programme conductor) to make announcements, and to take final call at the end of the play. Many of the proscenium curtains are hung from the top and either fall down or closed by sliding action. On an informal stage of South India a small cloth screen is held by two people across the performing artist (covering just part of the stage). The Sutradhar introduces the theme of the dance or story of the act (Katha =story telling) or drama. The screen, called Pat, is a plain cloth or one decorated with an image of a deity. Similar Pats are also used in Indian Hindu marriage ceremony to cover the bride on arrival of the groom. 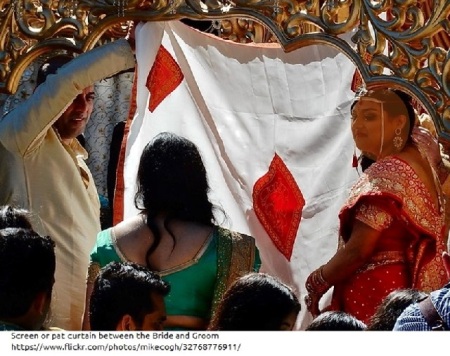 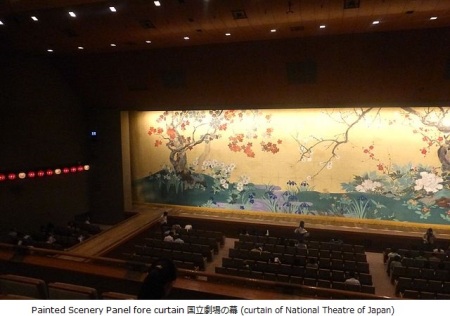 Other varieties of main curtain includes one leaf entity that is drawn to one side. The two leaf curtains are drawn up from the closing corners by a string to allow earlier or slightly delayed closer of the triangular pieces. Bi-leaf curtains are pulled across the stage like a ‘wipe-screen’ to signify time change in the act. 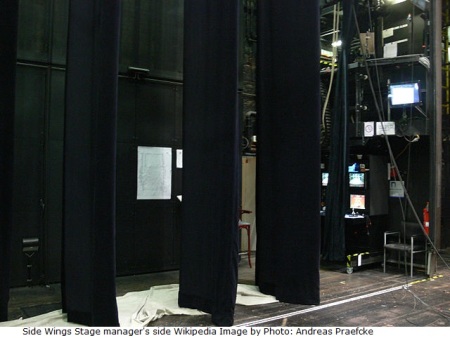 The frilled, Venetian or a Contour Curtain has back side pull strings that can individually or collectively pulled to various contoured patterns in the curtain before or while it is being pulled up. 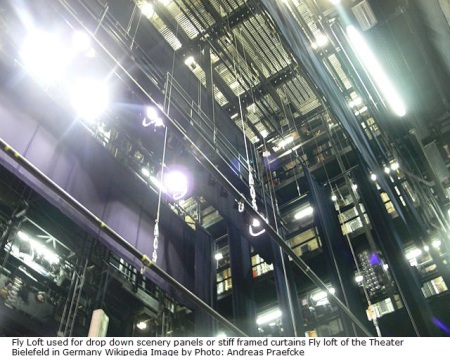 Effect Curtains can be the second line curtain behind the main curtain, but with very little space in between. The effect-curtain is made of very sheer material nearly transparent synthetics or lustrous metallic yarns. These partially occlude the vision of a back stage when illuminated from front only. The illumination from a front side is often through a projector that cast moving image on the curtain. These are often called Rain curtains. The curtains can move to sides or top. The curtains are light in weight, and to make faster and neat fall down, the bottom is loaded with glass or ceramic balls or wood or bamboo member.

Back side Effects curtain and hangers

The back space of the stage is covered by a masking curtain. The masking curtains, like the side wings, are dull-matt-opaque black colour. The stage set or hard dividers of partial height are placed against the backdrop of this curtain, often with narrow space for movement.

View from side wings of stage and curtains 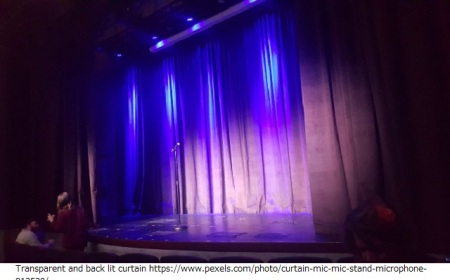 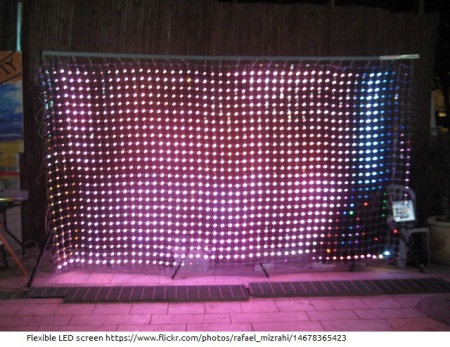 Large width curtains are difficult to move sideways in spite of automated traction. Two-leaf curtains, of a large width stage, ultimately forms a very large gather when collected at the side. Similarly very tall curtains have large hung, loading the fabric. Very tall curtains of heavy fabric require back side reinforcement through integrated wires or cables. These reinforcing elements woven or appended interfere in upward drawing. The curtain drawn upward gets folded up or remain straight. When folded up the fabric creases, and when hung straight remain loaded through self-weight causing uneven stretching.