The alloy of copper with arsenic or tin is called bronze. First metal of human history was copper, to be developed about 5000 BC. First copper was produced from naturally available nodules, which were of pure copper. Search for ores that had properties like copper led to Copper-Arsenic mixed ores. At nearly same time Copper mixed with zinc yielded Brass. Copper ores were invariably with Arsenic contents, and produced a bronze alloy of Copper-Arsenic-Tin mix. Due to problems of distinctive classifications of prehistoric objects, scholars use an all-inclusive term ‘copper-based alloys’.

Chinese bells (476–221 BC) > from Wikipedia Uploaded by Spiritia

Copper-based alloys had many local variants, in terms of constituents and smelting-processing. But the achievements across many regions of the world were important enough to be a marked era as Bronze age. This period saw production of harder and more durable tools than any thing available in preceding stone and copper (Chalcolithic) ages. 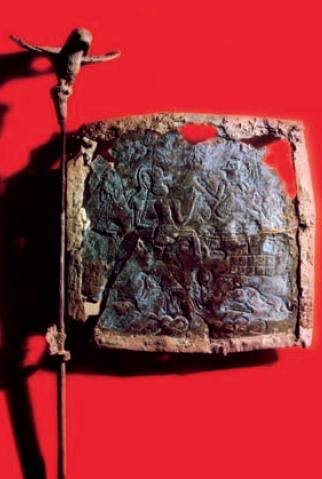 Bronze may be perceived as an improvised material than a new discovery. It was a material, which could be cast, formed by beating, and treated with heat to change the properties. Bronze-making, soon outpaced the copper production. Bronze alloys were produced from direct refining of arsenic and tin containing ore materials. Tin bronze was superior to Arsenic bronze in that the alloying process was controlled, and the resulting alloy was stronger and easier to cast. But Arsenic copper was easily and widely available, compared to Tin. During the Bronze age period bronze or brass were not neatly delineated terms.

Bronze cuirass 7th-6th C. BC> Pic from Wikipedia by PHGCOM

There are more than 400 types of copper-based alloys. Many of these are in use since prehistoric period, but with only realization at that point in history that some are different from others. There was no clear awareness as to what is a pure copper, tin or Zinc. It was believed to be another variety or version of the metal. The qualitative peculiarities were attributed to the raw material sources and methods of processing. Both of these attributes were however, exploited to achieve distinctive results. Copper form alloys more freely than most other metals, and mixes with wide range of alloying elements (metals and metalloids) to produce many alloys.

Modern day Bronze is an alloy consisting primarily of copper with about 12% tin. Some of the bronze alloys often contain other metals such as aluminium, manganese, nickel or zinc, and nonmetal or metalloids such as arsenic, phosphorus or silicon. Bronzes make a wide range alloy metals with peculiar properties like stiffness, wearing, ductility or machine-ability.