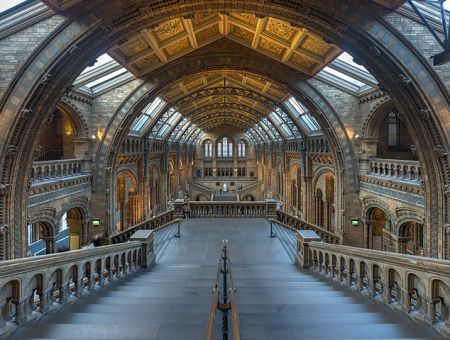 The Industrial age marked rapid changes in materials and technologies. Cast-iron, wrought-iron and mild steel were being produced in quantity, of consistent and reliable quality. Portland Cement was developed in 1824. Steel in new spatial-structural configurations, and as a composite with cement began to replace old techniques of construction. New large span entities like railroads, depots, shopping centres, bridges, warehouses, factories and commercial complexes began to come up using steel-based columns, beams and roofs. These new format structures nearly eliminated the massive masonry walls. Partially or fully framed walls were neo-gothic in character. Buildings could now be deeper and have a wider footprint. 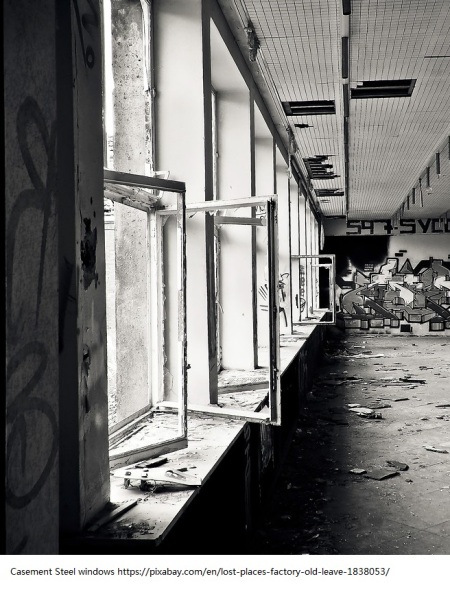 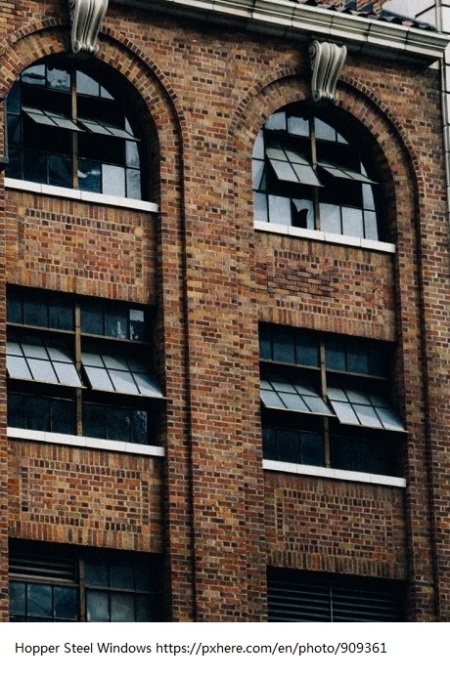 A window tax (during 1696 – 1861, in England) had forced people to wall-up unnecessary windows to save on tax, and also add fictitious windows for the sake of facade composition. During 1850 to 1870 facades of public buildings, of steel and glass began to be wide and tall. Ironically, in spite of the discouragements on taxation (window tax and a heavy excise duty on glass in 1746), this period witnessed some of the most innovative changes in windows’ design. One of the changes was borne out of necessity. Great fire of London, in 1907, forced the authorities to allow use of steel for windows. Wood windows were initially positioned flush with the front face of the building, but regulations asked for setting back them by 4″, from the outer face of masonry. 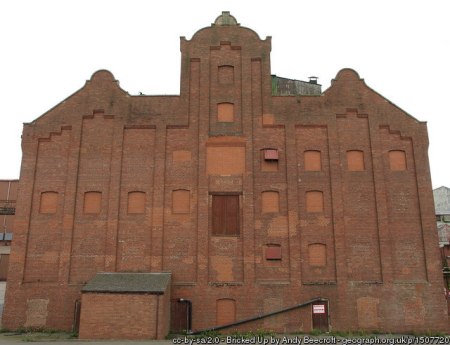 Walled up windows to save on Windows tax

The glazing panes for windows were now larger, and mullions and transoms thinner. The conspicuous columns and beams began to recede from the face of the building. The shop fronts began to have full size glass. Windows units for domestic as well as commercial spaces now began to be produced in factories, with standardization of sizes, shapes, materials and hardware. The large glass fronted buildings offered daylight illuminated interiors. This occurred parallel to major changes in of quality of fuels for home warming, cooking and lighting. The new architecture offered bright daytime illumination and night time environment free of smoke and soot. 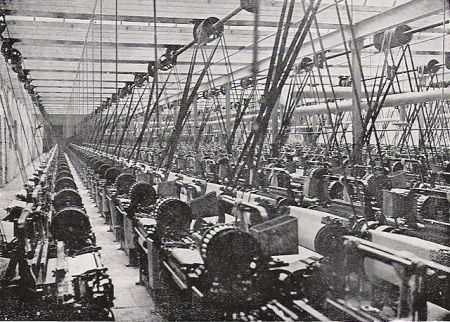 The transition to new age was not very smooth, there was resistance to do away with the time tested styling of windows, and skepticism to accept new things. Both the factors were significant due to the fact that craftsmanship of new building products was not as refined. Industrial products lacked the personalization or exclusivity. At another level the resistance was coming from builders and designers, who found their roles changing with ready to use windows and components. 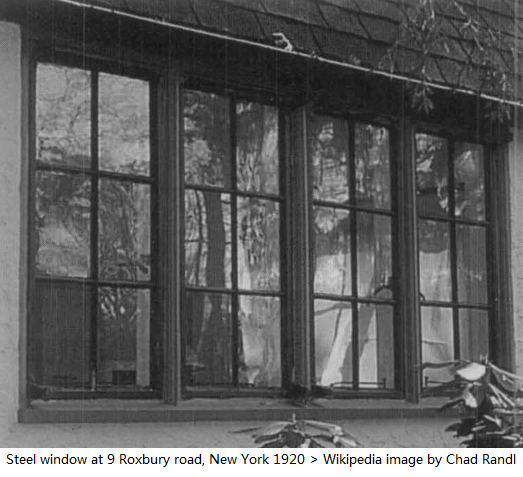 Industrial period caused the end of the last phase of Revival styles (late 18th C). But Industrial period also saw resistance across the Atlantic. On one side of the Atlantic, in Europe, opponents felt that industrial products are separating human beings from their creativity and individualism. To offset the poor quality of goods, stress was placed on craftsmanship, often with disregard to the cost or affordability. The Arts and Crafts style, also called Aesthetic style, created exquisite and decorated pieces, but these were called as ‘work of a few for the few’. On the other side of the Atlantic, the American Arts & Crafts movement was based on the clarity of form, and materials’ expression through grain pattern, colour and texture. The machines were used for lowering the cost and greater productivity. The US version of movement reinstated the ideal of design as the essential component for all products. 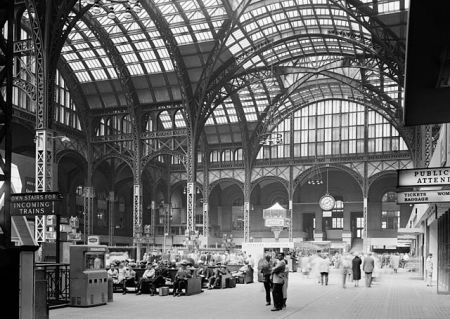 During the Industrial period large scale immigration and resettlement of workers increased the demand for public housing, which was cheap and quick in supplies. Steel rolled sections for doors and windows began to be available. Many new windows’ configurations such as the North light or saw tooth truss lighting, domed and sky lights, port holes were devised. Casement windows with friction hinges and sash windows with spring balances replaced the counter weight system. Windows with dual mechanisms of sliding and folding became popular. Many old opening styles were refurnished with better technologies, typically conservatories, jalousie, bay and bow windows were redefined. 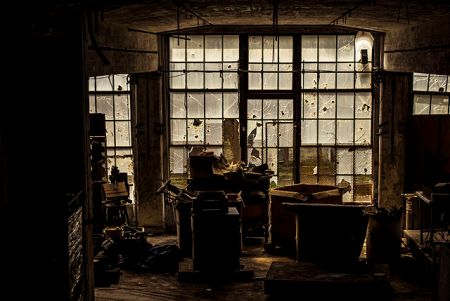 Openings’ planning attitudes also changed, till now domestic buildings had a main facade treated with a style, whereas all other sides were treated with less expensive and simpler windows. In high density urban areas, high rise buildings were seen from all sides and required equal windows’ treatment on faces. The equalized treatment on all sides ignored the climatic orientation or follow the interior functions. Such universal windows required many appendages or internal treatments. 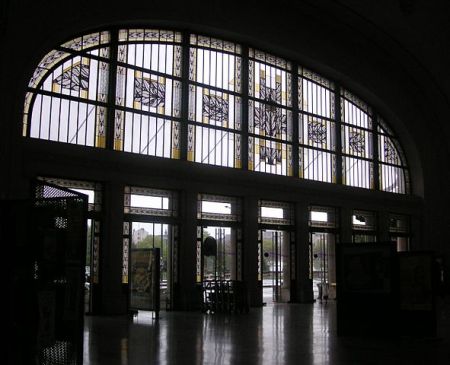 In US Southwest a term Mission style was used to describe US versions of Arts and Crafts movement. The local Mission Style mixed the rectilinear forms, with embellishments and Patterns of native America, Spanish and colonial origins. The Art Nouveau style which was concurrent with the Arts & Crafts style used natural forms with curved lines, arranged in asymmetrical forms. Windows were shaped with curvilinear shapes and masking grill to deform their rectangularity. 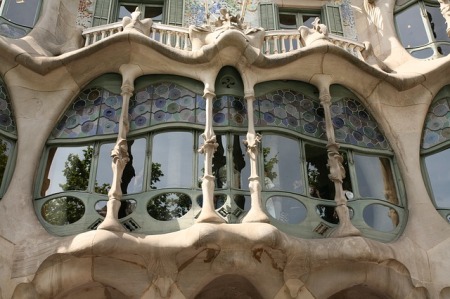