Industrial age, from the late 18th C changed the materials of construction and processes. These affected the form, scale and functions of the buildings. Cast-iron, wrought-iron and mild steel were being produced economically and qualitatively. Portland Cement was developed in 1824. First applications of new materials were through older processes, so the change was not noticeable, but did saw the termination of Revival styles. Steel was no longer a stronger cousin of cast or wrought iron. It began to be exploited for its tensile potential. Concrete as Steel-Cement composite offered radically different possibilities.

New structural configurations emerged for entities like railroads, depots, shopping centres, bridges, warehouses, factories and commercial complexes. During 1850 to 1870 building facades of steel and glass virtually eliminated the masonry walls. This was accompanied with changes in of the fuels for home warming, cooking and lighting. The glass fronted buildings created new architectural exteriors and brightly lit interiors. Buildings now had deeper spaces, and larger footprints.

The glazing for openings was larger, and mullions and transoms became thinner or disappeared. The conspicuous columns and beams on the facades began to recede to the interiors. Factories produced opening systems for commercial spaces, now had standard of sizes, shapes, materials and hardware. These also helped the demand for cheap and quick public housing. 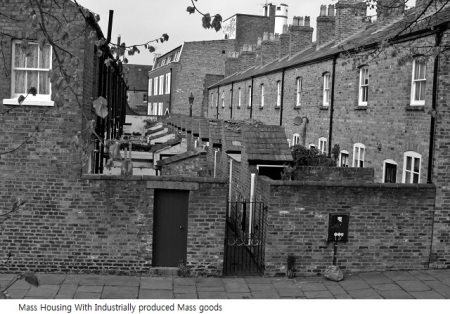 Many older types of openings, typically conservatories, jalousie, bay and bow windows were redefined with better technologies. Till now dwellings, had main facades as a style treatment, and other sides were simpler and less expensive. High rise buildings in dense urban areas were, however, seen from all sides and required equal treatments. The equal treatment on all sides did not respect the climatic orientation or follow the functions inside. The openings’ systems were required to do many different things, depending on the location. Such localization and customization were done by installing new internal treatments to openings.

Flooring was another changed entity. It was not possible to procure natural materials for very extensive spaces. So many new cement-based systems, precast and cast-in-situ, were innovated.

The transition to new age was not smooth. The resistance included, rejection of time tested styling and skepticism for new things. These were arising due to several facts, machine-craftsmanship was poor, no quality-assurance was available, and mass-produced items lacked the personalization or exclusivity. At another, level the resistance was coming from designers’ and builders’, who found their roles changing with ready to use components.