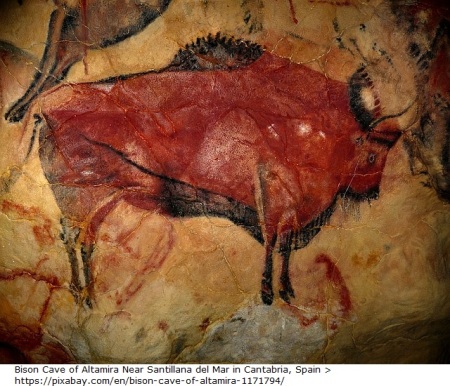 The wall paintings (upper palaeolithic eras) began as a medium of expression -a ‘story’ telling exploit. It was not a decorative art for a place, but a ceremonial craft in a space. The paintings were in deep caves as well as open sites. Bhimbetka, India, sites shows human occupation for more than 100,000 years, but earliest paintings on the cave walls here date back just 30,000 years ago.

Upper Palaeolithic period began roughly around 40,000/60000 years ago and lasted through the Pleistocene ice age, which is believed to have occurred near 8,000 B.C. This period was marked by the rise of Homo sapiens and their ever-developing ability to create tools and weapons.

The cave sites were difficult to access but were perhaps special and visited by several generations. The caves were deep and dark and artists worked with lamps and torch lights. The paintings were made on walls, ceilings and even floors. Many of the locations and surfaces were acutely irregular. Artists had to work in squatting lying position or use elaborate scaffolding to reach the heights. The scale of the job was stupendous. Deep cave paintings have survived, whereas open location paintings have generally been destroyed. 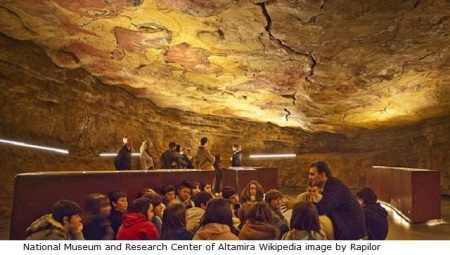 ‘At Bernifal in the Dordogne, the mammoths are painted 20 feet up. Some of the bulls at Lascaux are more than 20 feet long. The big cave vault at Lascaux, known as the Picture Gallery, is more than 100 feet long and 35 feet wide.’ 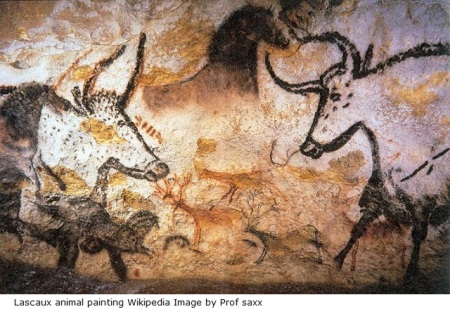 The cave art consists of simple impromptu works as well as grand executions. The first types were perhaps executed by amateurs or apprentices, and the second by masters. To sustain projects of such scale, the master artists were helped by a retinue of assistants and the community. The assistants helped in erecting scaffolding, preparing the surface to be painted, mixing colours, devising brushes and other colour application tools, feeding animal fats to lighting torches, provisioning food and water.

The cave artists have shown very high degree of professionalism. The compositions, understanding of the animals’ anatomical details, animals’ form, dynamism and movement, all represent a keen sense of observation, experience and discipline.

The limited choice of colours has been overcome by the masterly expression of form. There is consistent economy of line. The textural and tonal qualities do not represent the light and shade, yet suggest the depth through colour differentiation (recognizing the ‘grey tone value’). At places existing substrate textures have been exploited. The scale and distribution of objects within a composition do not follow a visual proportion system, yet prioritize the elements of the story. 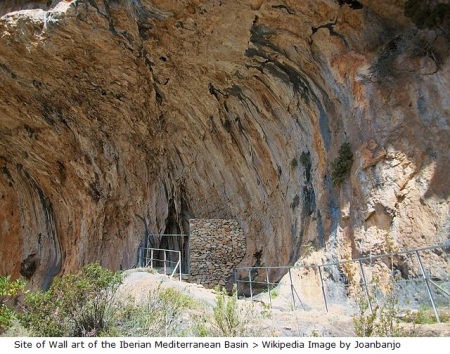 Wall painting began as a line drawing. Lines were frequently scrapped through a sharp edged tool. The etched lines perhaps helped in retaining the charcoal or soft stones rubbings. Such art works, as the primary responses were impressed on whatever interior or exterior surfaces that were available. However, it was realized that more permanent work can only be created in a protected space. The caves space and its environment stimulated a spiritual experience for the portrayal. The spaces must have been favoured by several generations, as some of the paintings have been modified repeatedly over thousands of years. The earliest works are refined compared to later works or modifications.

There is nothing to suggest that the art was a setting of a ceremony. There is no depiction of a sacrifice, or a master of ceremonies like a priest, sorcerer or a witch-doctor. The paintings also have no images of the surrounding terrain or the vegetation of the time.

The palaeolithic wall art consists of three main categories of subjects: animals, humans and signs (abstract or unexplained). The animal figures are the most detailed and naturalistic representations, but drawings of humans are rare and perfunctory. ‘In the case of Chauvet, predatory or dangerous animals dominate, while in Lascaux the main representations are of large herbivorous mammals’. At caves across various geographic locations the animals include: woolly rhinoceros, lions, bison, horses, aurochs, bears, reindeer, wisent, and giant deer and hyenas. At places species which were then extinct (as per the time dating technology), are also painted. Some of the most common species such as the reindeer do not find any representation, though bones have been found in the cave. The wall art also includes prints of spray painted hands, with abstract interconnecting lines.

The abstract signs are said to be representing the perception of night skies, of stars etc. Some forms of visual effects of movement or vibrancy (experienced in limited illumination) were perhaps included by use of florescent dyes, and slightly shifted images. 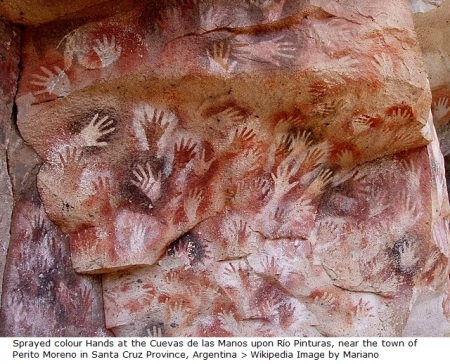 Wall art of upper Palaeolithic age in the early phase did not have any surface preparation except scrubbing off the loose particles and dust. Selected surfaces were away from flowing or leaching water. Early phase drawings were done in line work with charcoal, but compared to this the carbon black, a deposit over an animal fat burning lamp had better binding and colour saturation. Lines were also scratched or etched by a sharp tool and done over with a black colour. Scratching the surface also ensured better colour retention. Later renderings (filling up the colour) with red ochre (Iron oxide from Haematite) and black was done. In the later phase (25000/20000 BC) other colours such as yellow and brown were added to the palette.

In the initial phase dry colours were rubbed over the surface. In the later phase colours were ground with water and additives like blood, urine, eggs and animal fats. The additives improved the bonding, increased the viscosity (to prevent run off the surface) and reduced the drying time (allowing application and rendering effects). Learning also included: how to prepare intermediate shades (orange and browns), prevent algae like growth, avoid colours that fade over an age and moisture bleeding of colours and additives. Colours were mixed Calcium containing water or nodules to improve fixing. 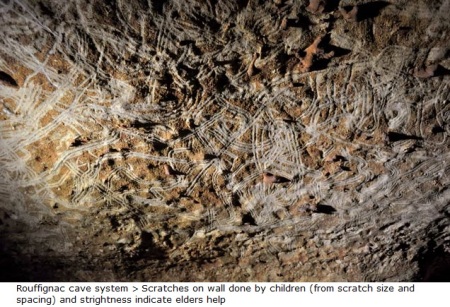 The colours were ground by rubbing them over a rough surface, and also through pestles and mortars. At Lascaux, some 158 different mineral fragments were found. Shells of barnacles and human skulls were used as containers for ground pigment pastes. Colour was applied by brushes, twigs and fingers. Colours were also put on by spraying through mouth and blow pipes made from bird bones, and by daubing with hands, fibrous pads and soft skins. Colours were sprayed over hands as the stencils to perhaps mark the participation or visitation.