Motifs are self-sustaining elements. Motifs can be linear outlines, solid filled-in planes, solid objects, or fractals. A motif may look like a familiar object, but need not be a representation or symbol. In other words, a motif may not have any abstract conveyance, yet may carry an associated or interpretive meaning. Motifs may have similarities, which are ‘here’ or in some remembrances. Motif recognition is a matter of perception, and so a personal affair. But there usually are many concurrences, and so some commonality is perceived.

A Motif, as a self sustaining element, is nominally oblivious of the happenings in the surroundings. But motifs have the potential to be part of a pattern, a larger whole. Such a fate is evident, because a motif while retaining its ‘fundamental trope’ subsists through several of the avatars. The changes occur through scaling, orientation, colours, or even some degree of form distortions. 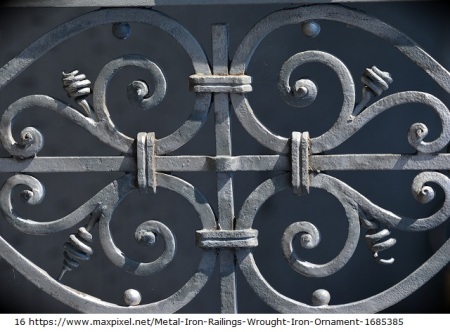 Motifs are impressionistic configurations, captured from the surroundings. The impression is expressed for posterity or communication by in-forming it over a medium or moulding it with materials. In both the cases, the form-shaping motif is affected by the formative materials, specific tools, techniques and the body posture. The motif as the ‘stroke’ matures through several conversions. The process of maturation endows new meanings to the motif. The ‘stroking’ can become extraordinarily florid to turn into a style.

Stylized Motifs have their own vocabulary of placement, associated linkages, scaling and permissible reformations. Such governance remains tied to the materials, craft-processes, associated persons (extended family, cast, creed, locality), and the period. The motifs begin to govern the pattern. The stylized motifs and patterns thereof, have a deep lineage. The stylized motifs, however, change when new materials and tools arrive to reform the techniques. New ‘strokes’ of motif creation offer different set of patterns. The changes first occur in the scale, line formation (thickness and consistency), the fill-in colours and textures, and shape twisting. The original and the differentiated motifs, both form a distinguished motif culture. 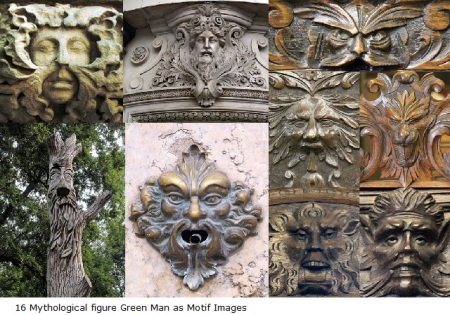 The motif culture can be so overwhelming that other crafts begin to accommodate it. An evolved motif in Embroidery or fabric weaving, may enter diverse fields of jewellery, metal crafts, painting, pottery, interior decoration, architectonic elements etc. A motif in new environment (society, materials, crafts or tools) develops with new forms of ‘strokes’ of motif creation. These occur on sheer strength of the Graphical value. New patterns generated for the graphical value can reflect some links with the original civilization. The trace of the original flavour remains, where the motifs are adopted as a replacement of products, sensorial variation and for political, cultural or social incentive. But where the motif is accepted purely as technological input, a brutal severance from the original connection occurs.

Primary motif is a stroke of straight or single curvature. The stroke has two ends, and are the potential connections of first order. Other likely nodes are the tangential or the crossings. Multi-stroke motifs have closed ended or open-ended shapes. Motifs have potential nodes of connections and togetherness. Motifs with geometric strokes such as lines (vertical, horizontal, inclined) or curvilinear seem familiar. In comparison Stylized motifs are re-engineered forms of real objects. A motif cannot be abstracted unless it carries a meaning, as a symbolic representation. The symbolic representation is about ‘abstract or non-tangible concepts’ such as movement, vibrant, static, serenity etc. There is a tendency to find meaningful object in seemingly chaotic situation. In case of motif, the recognition of geometry (form), proximity (relationships), style or an abstract objective, all help in finding motive for it.

The phenomenon of finding meaningful patterns in meaningless noise is called patternicity , and conversely, not perceiving patterns that are present in the visual stimulus is called apatternicity. 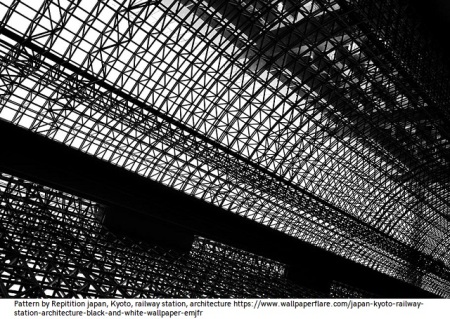 A motif coexists with other motifs, and is perceived if within a field of perception. Basic togetherness is of proximity. Other coexistence occur through the incidences of similarity, scaled identity, mirroring images, reverse positioning (upside down), direction, hierarchical order and density of placement define the nearness. Motifs overlap, partially converge, or merely touch at the edge. Such connections ensues pattern making relationships. 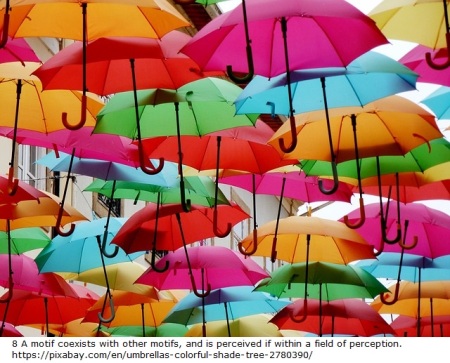 A motif establishes several sets of relationships to form a pattern: mutual distancing (density), position from the field edges, and confirmation of the operative environmental forces (gravity, magnetic field, air, temperature stresses). The density is defined by size, scale and form of the motifs. A pattern is recognized through following characteristics: Congruity (rotations, translations, reflections), Similarity (scale, orientation), and Isotonicity (similar interpretive or metaphoric meaning). A motif need not be central to a pattern, but rather recurrent element. 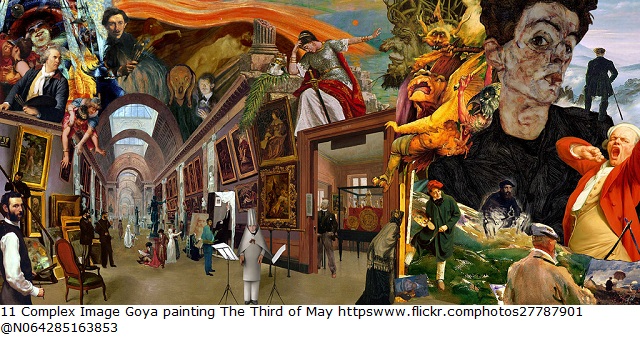 A motif, its pattern, whatever we visually perceive, is subjective, situational and circumstantial experience. The visual perception is formed by degree of familiarity, need, environmental conditions, foreground-background contrast, the visual frame, context, etc.

In literary narrative, a word or an expression, when used frequently and in synonymical manner, creates a pattern. But since such choices are of the author, it becomes a personal statement, a pattern. An author habitually uses these as an allusion. The motif or pattern, both allegorically indicate a thought, idea or concept. The symbolism behind the motif persists in the cultural setting but for a time. Beyond this the motif however remains simply a crafted stroke.

In oral expressions, speech or music, the Vowels, Consonants, Octave or Sur (Indian) etc. as motif are placed together form a unique note or pattern. And the same conducted with different time interludes, become varied set of speech or music pattern. To this set of variations, the speaker adds phonetic variations, whereas the musician adds own mannerism of playing or singing. The music instrument and the space add peculiar reverberations. The motif and pattern of the sounds change with the ‘playing’ and broadcasting tools, both favouring certain frequency range and tonal (bass-treble) quality.

‘A form constant is one of several geometric patterns which are recurrently observed during hallucinations and altered states of consciousness Klüver noticed that mescaline produced recurring geometric patterns in different users. He called these patterns ‘form constants’ and categorized four types: lattices (including honeycombs, checker-boards, and triangles), cobwebs, tunnels, and spirals’. (-Wikipedia).

Motifs have a form, often with intelligible process of creation. But we try to interpret and reformat it through logic of mathematics. Man made motifs as repeatable strokes are simple but the ones ‘experienced’ in nature are often inexplicable. Natural motif forms do not exactly replicate. Some believe these can be ‘learnt’ through fractals (fractals are mathematical patterns that are scale invariant). The motif-forms at simple level are like spirals, circles, waves, meanders, crystals, snowflakes, bubbles etc. But complexity arises with sequenced repetition, axial rotation, mirroring or reflection. The motif, as single element may not offer much but as placed in various patterns it gains meaning. 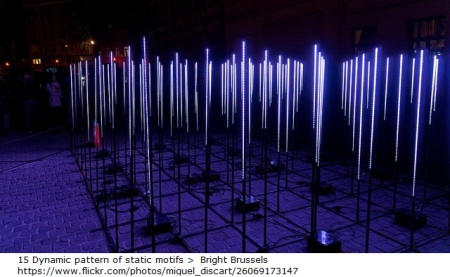