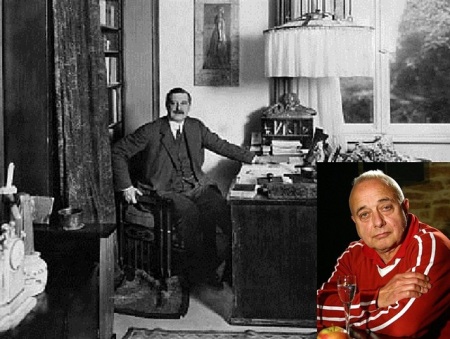 Peter Behrens (1868-1940) was a German artist, architect and designer. His creative conceptual clarity, art, products, architecture and typography all have influenced a generation in Europe. He was born in Hamburg. He studied painting at the School of Art in Karlsruhe (1886-1889). He spent the 1890s in Munich as a painter and designer, practicing in than current Jugendstil or German Art Nouveau style. He was actively involved with the Berlin Sezession group of artists, architects and designers in 1893.

Sezession was an Austrian and German group of progressive artists, who in 1892 (first in Munich and then in Berlin) formed a separate entity, breaking away from the conservative artists. The secession was a space for people from different backgrounds to work together to influence a new culture of German Modernism. The First World War created a negative impact on the Sezession but Hitler’s rule removed it from the scene. 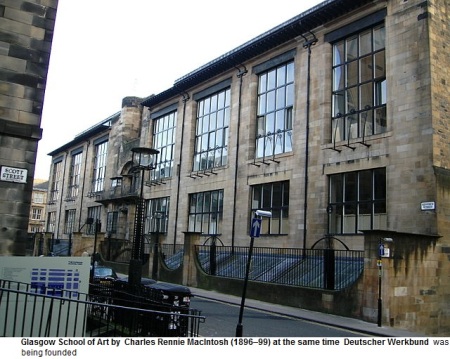 Peter Behrens was the co-founder of the Deutscher Werkbund, whose aim was to link industrialists and artists, paving the way for design-led technology.

The Deutscher Werkbund (German Association of Craftsmen, German Labour League or German Work Federation was -ˈdɔʏtʃər ˈvɛrkbʊnd) was inspired by the Government, in 1907. Its initial concept was to bring together designers and manufacturers to integrate the traditional crafts and industrial mass production techniques. Its motto was ‘Vom Sofakissen zum Städtebau’ (from sofa cushions to city-building).

It became the most important group of artists, architects, designers, and industrialists, to support the development of modern architecture and industrial design. Werkbund was first led by Herman Muthesius. Other key members included Mies van der Rohe and Eliel Saarninen. This initiative later led to formation of the Bauhaus School of Design.

Werkbund members believed that unity and beauty of form was essential and saw industrialization as a force that demanded a re-calibration of the German aesthetic standards. They believed that German designers needed to shift their focus toward designing objects that could be mass produced, to object based on its functional logic, and that each object should be honest about its materials. Its mandate was to enhance the quality of German products in world markets, mainly England and United States in pre WW-I period.

Peter Behrens (with Henry van de Velde and Muthesius) was also part of the original leaders who developed the philosophy of Gesamtkultur # –a cohesive cultural vision where design was the central force for fresh, man-made environment. The visual language perceived for Gesamtkultur was bereft of ornamentation, in favour of simple and function. For the cohesive cultural vision and for re-configuring, optimizing and mechanizing their productions, they discussed all areas of design, graphic, typography, products industrial products design, architecture, textiles, etc. Hermann Muthesius had returned from England to Germany with Morris’s Arts & Crafts concepts, but here he was focussing on ‘mechanizing the production with high-quality design and material integrity’.

# Gesamtkultur, as a word was coined by 19th C German composer Richard Wagner, who saw his operas as a total work of art, synthesizing music, poetry, drama, theatre, costume, and set design. It is used for a work produced by a synthesis of various art forms. 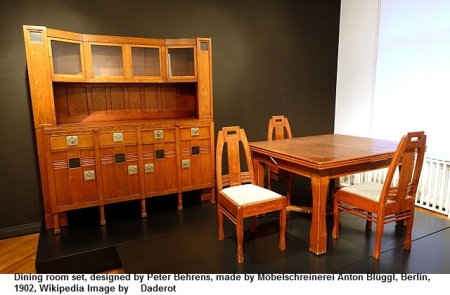 Peter Behrens, began working as a painter, illustrator and bookbinder. He in 1899, under the influence of J. M. Olbrich moved from Art to Architecture. He was a self-taught architect. In 1899 Behrens accepted the invitation of the Grand Duke Ernst-Ludwig of Hesse to be the second member of Darmstadt Artists’ Colony. Here Behrens built his own house as a debut in architecture. He also designed furniture, furnishings paintings etc. for it. This building in Jugendstil style (German equivalent of Art Nouveau style), though Behrens never lived in it, is considered to be the turning point in his life.

Behrens became director of the School of Applied Arts in Düsseldorf (1903-1907). At Düsseldorf, Behrens became interested in Theosophist geometry. The curvilinear forms that he once used in own residence were now replaced with the rectilinear geometry. At Dusseldorf Behrens designed a remarkable building, the Crematorium in Hagen (1906), using the plane surfaces and incised linear decoration with experimental cubic symmetry of geometric volume. He also designed several other buildings in now sober and austere style. This included the Exhibition hall for the Northwestern German Art Exhibition at Oldenburg (1905). With new prestige, he began to frequent the bohemian circles and showed interest in subjects related to the reformation of the lifestyles.

Deutscher Werkbund principles of quality, as formulated in 1907 was the first theoretical formulation for pursuit of Quality. These concepts were so remarkable that several decades later QMS ( Quality Management Standards, ISO 9000) of the ISO and the SA (Social Accountability Standards ISO 8000) had similar foundations.

Germany was embracing a new philosophy and visual style for its simplicity and exactness. The new products, with their high level of functional utility and beauty were expected to build a new future for German exports. Behrens, with his multi disciplinary experiences was capable of designing things in diverse fields. As a product designer, in 1898, he designed glass bottles and different types of wine glasses. In 1907, Behrens was invited for the post of an artistic adviser to Germany’s largest electric company AEG (Allgemeine Elektricitäts Gesellschaft, Berlin). He was required to form a monumental image for the prestige of the firm by arranging mass production with artistic expression. His job included design of electrical equipments, fixtures, branding packaging, catalogues, posters, architecture for factories and workshops. 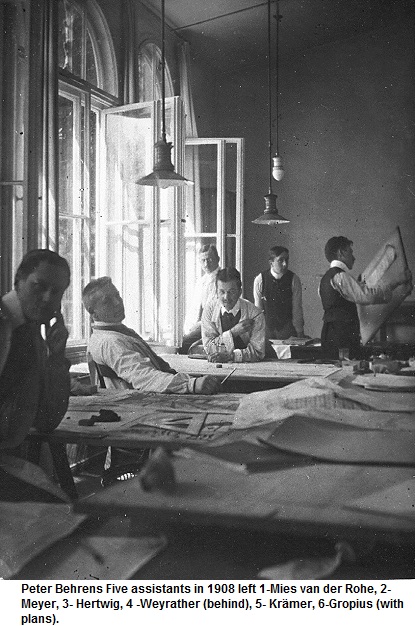 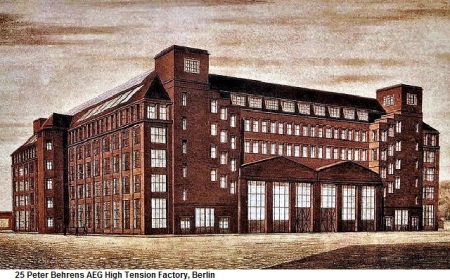 The Turbine Factory for AEG, of exposed steel, concrete, and large areas of glass was admired Le Corbusier as the ‘cathedral of labour’, in 1912. The Mannesmann Administration Building in Düsseldorf and the Gas Works in Frankfurt-Osthafen both, were designed in 1910-12.

Behrens always made the final decisions and had total control of the design process. The clarity of the volumetric articulations is evidenced by the choice of the points of view. The buildings were always represented in relation to the environment. He showed an ability to express the materials in the facades through the representational graphics and in the reality of built form. 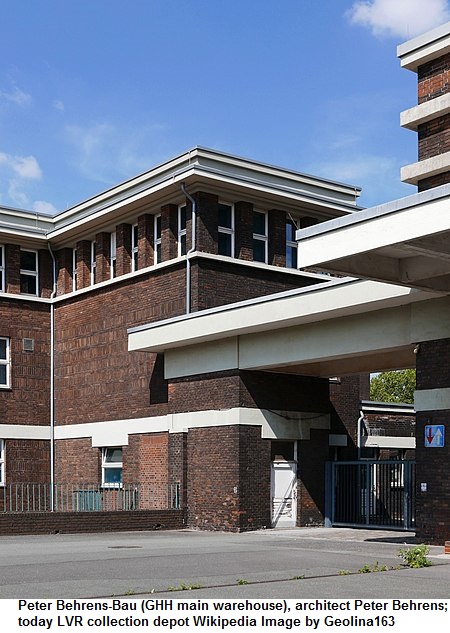 ‘Design is not about decorating functional forms – it is about creating forms that accord with the character of the object and that show new technologies to advantage.’ –Peter Behrens. 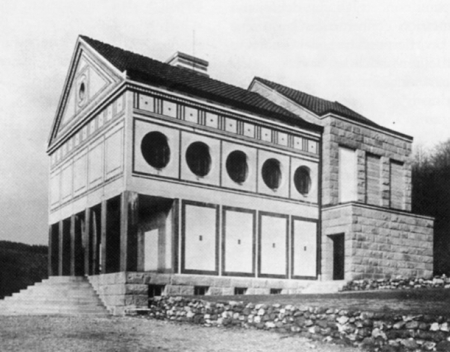 The transition between this naturalistic period and his later activities, in the Berlin office show a search for new linguistic conventions based on abstraction, anti-naturalism and expressionism with a degree of monumentality. Peter Behrens remained head of the Department of Architecture at the Prussian Academy of Arts in Berlin. In 1922 he became a professor of Architecture at the Academy in Vienna, and thereafter little works of consequence emerged. Behrens became associated with Hitler’s urban dreams for Berlin. Hitler also admired Behrens’s Saint Petersburg Embassy.

From 1920 and 1924, he was responsible for the design and construction of the Technical Administration Building (Technische Verwaltungsgebäude) of Hoechst AG in Hoechst. In 1926, Behrens designed a home for Englishman Wenman Joseph Bassett-Lowke in Northampton, UK. It is regarded as the modernist house in Britain. In 1928 Behrens won an international competition for the construction of the New Synagogue, Žilina.

Behrens was AEG’s chief artistic advisor from 1907-1914 and is now considered the Father of Industrial Design. He designed several domestic products for use of electricity. The domestic products were conceived for mass production, utility and not have ‘impersonal’ identity. The objects include fan or Ventilatoren in 1908, light fixtures and electric teakettle. The Fan evolved from the first electric fan, created by Schuyler Wheeler in 1886, with variations in speed setting and wind direction. The electric kettle was the first product with immersion heating elements, integrated into the body of the kettle rather than placing it as an adjunct element. The kettles were produced in several shapes (cylindrical, octagonal or oval), materials (chromium and brass), and surface finishes. Of the possible 216 configurations only 30 were produced. He devised, the Sans serif fonts for the reductive graphic style. Behrens is credited with Schrift (1901-7), Antiqua (1907-9) and Medieval (1914), through Klingspor Type Foundry.