Spaces are divided with partitions and also segmented through ephemeral means. The spatial definitions formed by partitions or physical barriers are permanent units, whereas the segmented spaces are mere recognitions that are transient and symbolic. Spaces need to be divided into smaller parts, as much as combined into a greater whole. The sub-unitized spaces are sometimes recombined by selective dissolution of the partitions and zoned identities are re-comprehended by redefining their purposes. 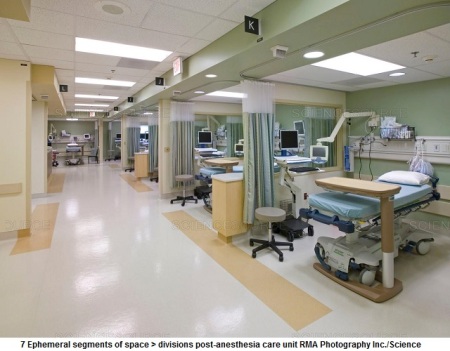 The spatial entities have two sets of characteristics. 1 – A space with personal identity is a centred spread. It is focussed to the core and with variable peripheries. 2 – A space with identity of a group is of precise extent. It has an emphatic periphery. In the first instance the spatial quality emerges from the physiological and sensorial reach to others and objects. In the second instance, the group dynamics like customs of social distancing, sensorial responses for interactions and in recognition of age, sex and relationships between the people, define the space. 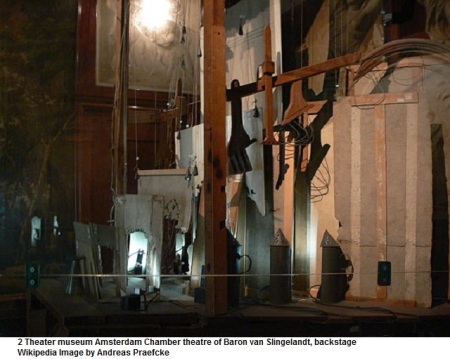 The structural divisions in built-forms are finite zones for identity, isolation, privacy, security and environmental exclusivity. But these can be often too large or small. Small spaces need to be enlarged by transgressing to adjoining zones or even outsides, through the openings. These form convergent spaces with the adjoining zones, like verandahs, galleries, bay windows, etc. Large spaces have the scope for inverse or inward transgressions. The inward intrusions change the functional character and sensorial qualities by forming mew peripheries. Where sub-spaces are consistently used, these may be distinguished with built partitions. 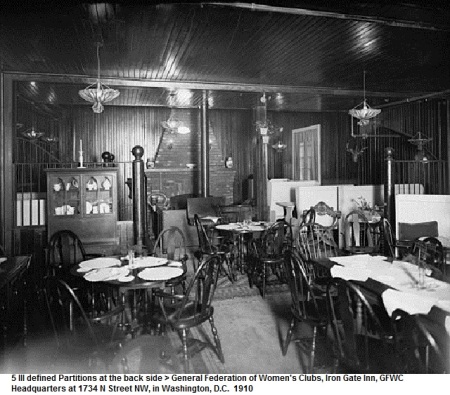 Partitions brand a space for exclusive use, private access and status quo. Once palace and manor kitchens had many roomettes like for cutlery, crockery, linen, cream and milk, bakery items, poultry, meat etc. The primitive cooking place was also meal taking place. These were structured storage units, but now have become segmented parts of kitchens, with better cabinets systems. And nowadays with continuous supply chain system very little storage segments are needed. Dirty kitchens forced dining to separate room. In modern times cooking is no longer dirty and cooking is not necessarily cook’s or housewives’ domain so cooking and dining both impinge on family rooms. 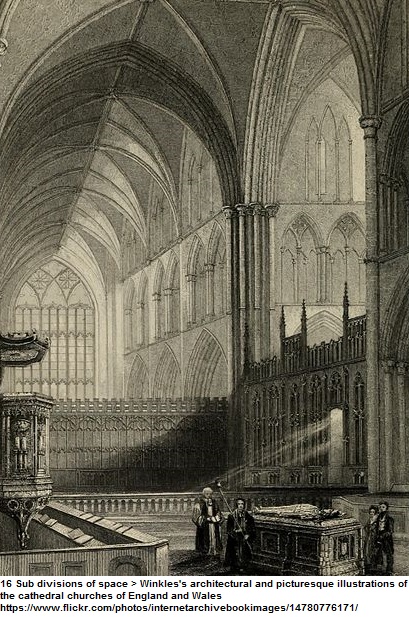 To coalesce two structured spaces, the prime strategy is to relocate, resize or add openings between two. Next strategy is to combine the functions of two spaces. Family rooms and drawing rooms are no longer separate entities. 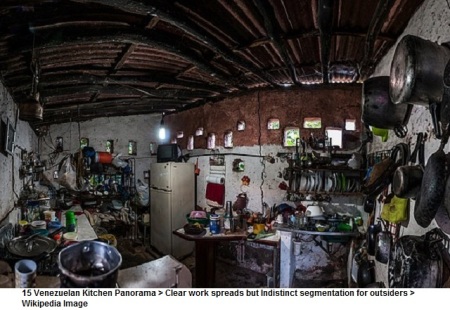 Ephemeral divisions relate to delineation of areas for people, tasks, amenities, facilities, orientation and environmental affectations and sanctimony. Such delineated areas are customary and respected by the members of the family as much as by the community. Some areas are considered sacrosanct and require affirmation to rituals. The tasks conducted here in ephemeral divisions are variable in spread and transient in time. The spread is defined by the physical reach and the tools’ assisted range. Postural capacity and adjustability both rationalize the spread. 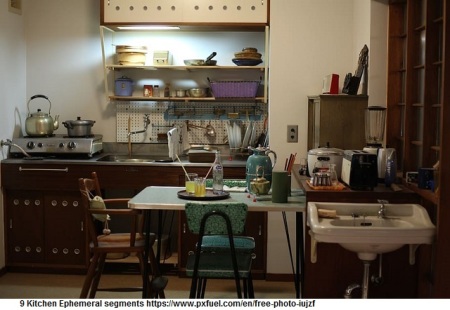 Ephemeral segmentation of space occurs with both, the Time and Space interventions. Time interventions allow use of same space for many different purposes. This avoids the conflicts of privacy, sanctimony, security, territorial ownership or access and sensorial mix-up. The Western Wall, Wailing Wall, Kotel or Buraq Wall, are different ephemeral divisions of Holy place in old Jerusalem. Spatial distancing and time delay allows reenforcement of individual identities but when at excessive scale creates alienation. The appropriate balance can have different meanings for the concerned persons, objects, activities, intentions etc. 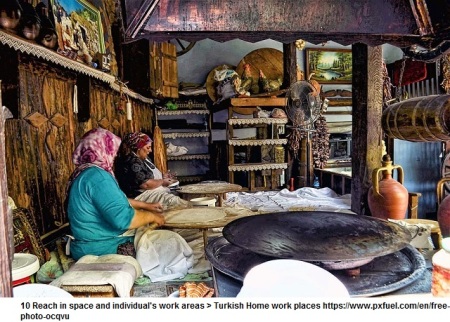 Defined or Abstract, space segments are recognition of the edges. The edges reflect three distinct spatial characteristics, namely, –Edge or Periphery, Core and the Adjunct.

In case of defined or structural divisions of a space, the edge as the barrier has a peripheral character. This is more so when the space spread is large enough to distinguish the core versus the periphery. The adjunct areas here have relevance, wherever the barriers are breached. In case of ephemeral divisions of a space, the edge is not real but just a recognition of extreme part of a spread. All ephemerally segmented spaces have unreal edges that converge with other domains. For segmented or partitioned spaces the periphery becomes the area of connections and variations. Besides the environmental variations and communication, it is also a point of control.

The housewife chooses a space segment, usually a verge, from where everything can be observed and controlled. The services area, cooking, dining and the entry, form such connected segments. In single room spaces like Bhunga or huts the door is such a control point. 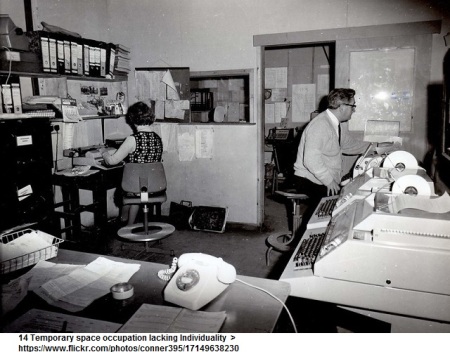 The core is the place of task-handler, equipment or source+direction of environmental affectations and possibilities of control over other spaces. The core defining elements could even be sited abutting a structural element. Every other section beyond the active core is peripheral. A space gains a personal meaning when the activity conductor is the focus and everything is distanced from it.

The societal intention of a space is not necessarily circular but rather a concentric one, where the periphery is the greatest distance before becoming irrelevant. The core and periphery are distinguished by the social distancing as a recognition of age and sex of the people. It can be personal at one level and also as accepted tradition or taboo. The personal need for segmenting a space is to accommodate the self, include other people.

The personal space may not need compartmental divisions except for safety and security against displacement. Personal spaces flourish better with opportunities of interaction and participation in activities of others. This is possible if the spaces are only ephemerally segmented. The public spaces, if extensive, allow several segments to thrive. 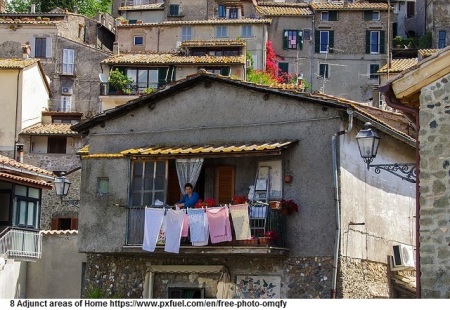 The adjuncts are sub core sections, which impinge the main spread, but in different time and space. The adjuncts spaces have nearly distinct identity and so are separable. Adjuncts share a similar architectural ethos, common sensorial experiences but with variegated environment. Verandahs, chowks, courtyards, terraces are such locations. Off-centric core areas occur for one person or point focussed concentration. These are cornered entities that only flourish with adjuncts acting as escape areas. Performance stages function only with side-wings and backstage support. Public spaces and plazas cannot survive without the adjunct streets. Public buildings exist with attached foyers. Multi-room homes are served by the lobbies.

This is the 31st article (in continuation of old series -new beginning) on ISSUES of DESIGN.