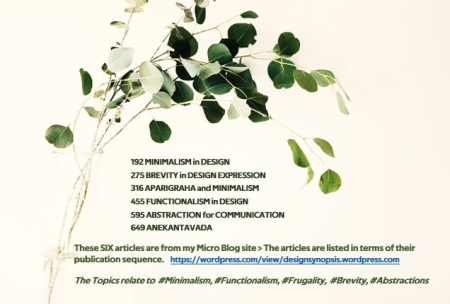 These SIX articles are from my Micro Blog site https://wordpress.com/view/designsynopsis.wordpress.com  The articles are listed in terms of their publication sequence.  The Topics relate to #Minimalism, #Functionalism, #Frugality,

An Expression to be effective requires condensation and rearrangement of the content. The minimalism takes many different forms, in Art, it takes abstraction of form or story, in Writing, it turns to recitable poetry, and in Built forms (product design and Architecture) it needs to remain steadfast with sheer functionality.

In audio-visual expression, the reenactions are never faithful to the original, and yet the improvisation can be creative. For minimalism, the productivity is just the frugal use of means, but efficiency of the process. Minimalism is the distinctive impression created through the space and time scales. ‘In design, clarity trumps the brevity’.

The word Frugality stands against Substantial. A thing, substantial, is more ‘down to the earth’, but conversely a minimal entity is infinitesimal or spectral.

Bauhaus was about rejecting the unnecessary things that had begun to undermine the functionality of designed objects. Minimalists ask, What can we strip away without losing the purpose and identity? This is in stark contrast to Redesign Engineering ideology, which ask, What can be redefined? And the search is not a “Eureka”, but adopting and improvising the operative efficiency available in competitive offerings.

Brevity in Design relates to two fundamental measures, the TIME and SPACE. And the calibration of both, leads to efficiency. Brevity in architecture is a reflection of minimalism. It comes from a yearning to ‘shed weight’ so as to be less ‘substantial’. In architecture (and also other forms of design) ‘substantial’ translates into monumental or elaborate. A monumental entity, must confirm to the stabilizing force of gravity, and so should be large and wide-based. An elaborate entity could be multi-functional or multi-faceted, satisfying many needs.

The superfluous ‘becomes intense and dense’ in ‘classical ages’ that reappraisal becomes necessary not to discipline it but to discover the ‘new’. But such pursuit for Brevity starts at personal level, and is initially a preconception. By the time the originator and followers understand the means and methods of it, it may become a style weighed down by ‘substantial’.

Aparigraha means non-possessiveness or being non-greedy. Aparigraha is the opposite of Parigraha, which means, to amass, crave, seek or seize material possessions.

Aparigraha is one of the virtues in #Jainism. It is also one of the five vows that both the householders (Sravaka) and ascetics must observe. Aparigraha is a desirable self restraint and sincerity (as a fellow citizen) for possessing what is absolutely necessary and so minimum.

(#Jainism -a religion in India, originating in roughly the same time span as Buddhism).

American scholar Richard Gregg coined the term ‘voluntary simplicity’ to describe a lifestyle purged of the inessential. My space is small but my life is big.

The concept of minimalist design was to strip everything down to its essential quality and thereby achieve simplicity. Thereafter nothing can be eliminated ‘to simplify or improve the design’. Minimalists not only ‘reconsider’ the physical qualities but spiritual meaning also.

This usually creates a design statement that is very frugal and personal. And it requires converts, who can understand, believe and accept it. If you are a design service provider that needs spirit and energy of a crusader.

In the wake of World War I, an international functionalist Design movement emerged, riding on the wave of Modernism. This was triggered by consumer product periodicals that had wide base of female subscribers.

The movement was for achieving purity in design of a product through functional relevance. This was gaining momentum with a similar trend in art, architecture and craft-artefacts. It was for reduction and restrain with the aim to remove the unnecessary and put the essential in the spotlight. These trends in Design were confirming to than current ideas of socialism and humanism.

Louis Sullivan’s 1896, idea of ‘form ever follows function‘ was more metaphysical than being practical to users’ needs. It was more reflective of ‘lack of (‘excessive’) ornamentation. Some treated as ‘bald and brutal’ manner. Philip Johnson daringly ‘held that the profession has no functional responsibility whatsoever’. The postmodern architect Peter Eisenman was more extreme, ‘I don’t do function.’

From all these personal interpretations products, art and architecture began to rely of structural stresses as expressed through straight line and right-angled geometry. This was bereft of emotion, as good design should be ‘clear and unobtrusive.’ The success of functional design was in the rationality and cost effectiveness, as it removed wastage of space and materials.

Communication occurs through writing, orally, gestural deliveries and through metaphors or graphics. Authors usually have some knowledge about the target audience.

All communications use spatial or temporal assets and so need to have minimal content. The tradition is ancient one, as knowledge was conveyed orally as Shrut Gyan’ (Vedic mantras are in easy to remember and in recitable form).

For content rationalization several strategies are resorted to. The contents are abstracted by removing all time-space gaps and less important information. The language in Internet chat-rooms, whatsapp, etc. shows the nature of abstraction spreading across the world. Here common words are shortened by eliminating vowels and are denoted by their phonemes. Symbols and metaphors are also used to squeeze the contents.

The contents are sequenced, with time as the operative element. Oral or gestural deliveries are sequenced in time and so are lineal. Writings can have non-lineal arrangement if aided indexing. Graphical formats are impressionistic, rely on the holistic effect.

The focus of abstraction and communication are through the retrieval and re-enactment of content. So what one strongly feels, desires, believes, becomes the force-de-majeure.

The contents can be minimized by forming bridges (e.g. hyperlinks, bibliographies, index) to create a seamless statement or a larger concept. A well linked or cited content vouches its authenticity through circumstantial referencing.

Abstraction is a process of removing irrelevant appendages from the idea, thought or concept. This reduces the complexity and increase efficiency.

Abstraction in Art began with the removal or de-emphasis of the background or the context. This allowed the thematic concept to be perceived not just distinctly but in a different manner. The abstract Art was more concerned with the later. The newness of the object independently of its associations or attributes provided an exciting option to impressionism and expressionism. Both the -isms were substantially dependent on negation through colour, texture, form depiction, foreground-background delimitation, depth representation with intensities, perspective or scaling, and environmental connections like light and shadows.

Word Abstract derives from the Latin Abstrahere =to divert and Aabstractus =drawn away, drag away, detach, pull away, divert. It is an assimilated form of Ab =off, away from + Trahere =to draw.

In computer programming abstraction hides all but the relevant data about an object.

Acute abstraction takes away the reality. The subject is not sought or to be recognized. It has no bearing of perception like top-bottom, left-right, real or mirror. But on massing the abstract creations, do reflect the creator and that becomes the style. It is the mannerism that becomes universal. But before that universalism sets in the Art moves to something New.

The word ‘anekaāntavāda’ is a compound of two Sanskrit words: anekānta and vāda. The word anekānta itself is composed of three root words, ‘an’ (not), ‘eka’ (one) and ‘anta’ (end, side). These three together connote ‘not one ended’, ‘sided’, ‘many-sidedness’, ‘manifoldness’ or ‘many pointedness’.

According to ‘Jain’ (Indian religion that originated in roughly the same time span as Buddhism) doctrine, there is no absolute truth or reality. Anekantavada has also been interpreted, to mean non-absolutism. It is said no single concept can describe the nature of existence and the absolute truth.

Every truth is incomplete, and at best a partial truth. The ultimate truth and reality, if any, are complex and multi faceted. All knowledge must be qualified in many ways, including being affirmed and denied. Anekantavada is a fundamental doctrine of Jainism.

According Jainism reality has many facets, which are difficult to be perceived by one person or through several cycles of life. Different people interpret different aspects of it. Their conclusions are good for them and in the time-space context.

Reality is what we perceive and also of what we do not perceive. We cannot understand the reality unless we are ready to accept both. So all conditions have potentials of many truths.