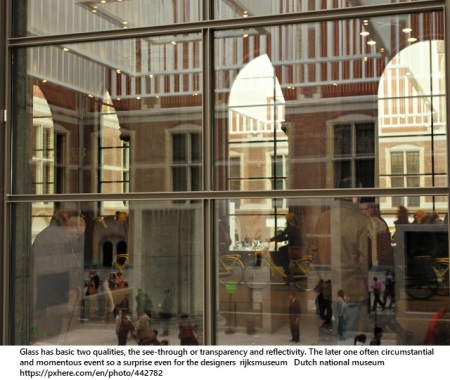 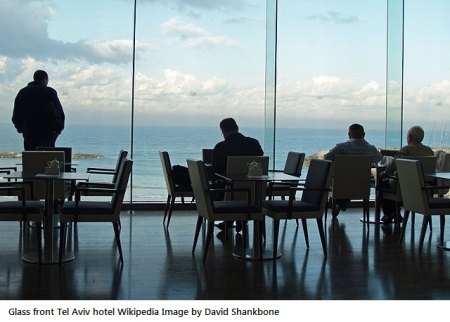 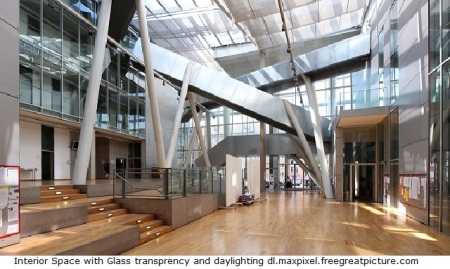 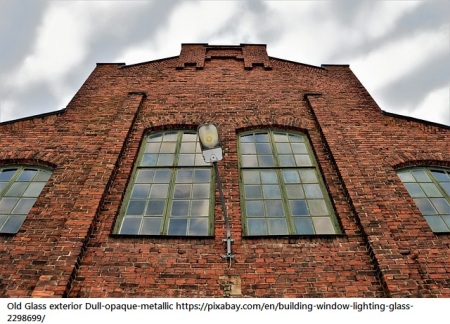 DAY TIME VIEW -from outside, in early days had a grayish -metallic surface. It was a dull and muddy pane with wavy figures (due to flattening of a disc cut out of a bulb). In later periods, it had lesser impurities, fewer surface undulations, but was ground to a glossy finish. Modern glass is comparatively very glossy (unless specifically ordered or treated), which allows reflection of the surroundings and the sky. The reflectivity, with additional treatment, often excludes the interior view (mirror glass and photo framing glass). Polyester films and surface metallizing adds one-way opacity, permitting unhindered view from the other side. 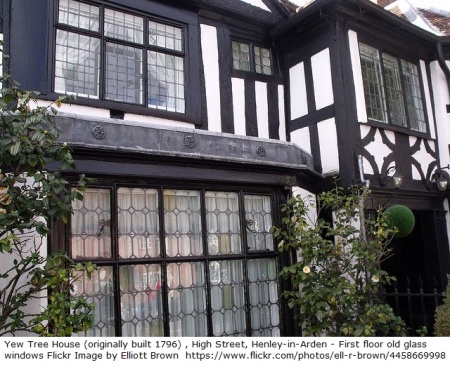 DAY TIME VIEW -from inside, the glass of early days, and its later day modern version have had issues of colour coordination with other surface finishes. Both types of glass had a tinge that strongly affected the colours of the interiors. Fresco and other drawn art work could be re-calibrated, after fixing of the panes (or during re-installation later with superior glass). The ceramic or coloured stone mosaics of floors and walls, however, did not allow such corrections. Such interior colour schemes had to be pre-planned in consideration of the glass tinge. Colour coordination with window frames and members such as muntins, mullions, jambs, etc. with the metallic-grey tone of the glass was difficult.

Poor quality of glass was to an extent solved by colouring it. Pot glass had dark-colour presence that was effective when back lit very brilliantly usually after the sunset. Such intense interior illumination was not available in that age. The stained glass was comparatively light coloured but still filled the interior profusely. Later part of Gothic architecture saw the required sobering with use of grisaille painting technique, or use of the non stained cristallo glass. 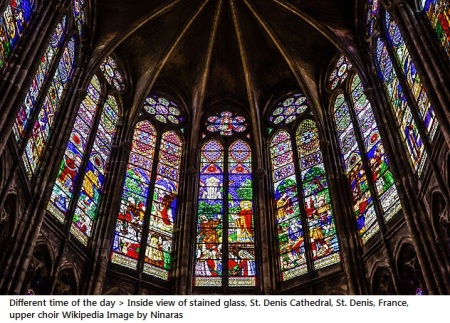 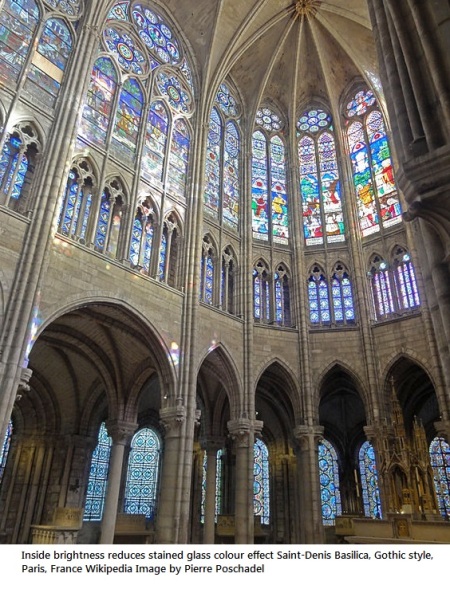 In stained glass treatment the need to stretch the story board across many sections of the window was so strong that all framing and dividing members like muntins and cams were made slender, at least on the face side. These were also dissolved by colouring them with the same tone as the outlines in the picture. 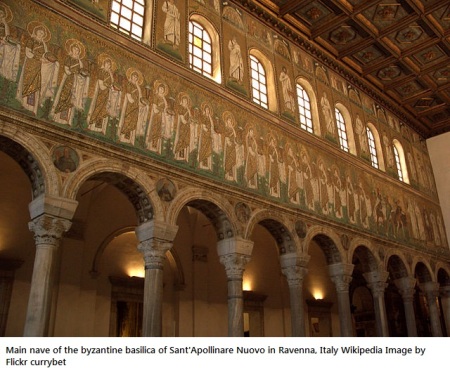 Early modern-day architects had to overcome the fuzzy view through poor quality of glass. As a result small pieces of glass were used, and contrasted with the white painted mullions, muntins, jambs and rails. The typical US colonial window had subdivided glass panes which did not offer a clear or un-distorted view, so were used for illumination, and covered with translucent curtains to occlude the view. Later, at the end part of Industrial revolution period as the glass became clearer, the mullions were thinned or made of metals, This dissolved their presence.

NIGHT TIME VIEW –from outside was important to register the presence of the building. Visibility of the Churches and Cathedrals and Places at night provided an assurance of protection. The main problem was cost of illuminating the structures, whether from outside or inside. The presence of small interior light visible through a roof light, lantern window, rose window or pinnacle, was assuring. It was an economic and effective device. When windows of lighter stains and white glass became popular, it was easier to provide a visible illumination from inside.

NIGHT TIME VIEW -from inside has been a problem in the absence of street or public illumination in the vicinity of buildings. The urbanization now provides illumination to back lit the glass of the buildings. Historical monuments or modern buildings always have some background illumination. Some important buildings are specifically lit outside and from within the building to enhance the architectural quality.