Masking and Framing of openings, have many diverse purposes but both are substantiated by their edges. Openings have their own definitive closed ended edges, but masking and framing redefines these many times with open-ended edges. The edges, not only isolate a segment of the opening, but always make the view more emphatic and relevant. The edges of the mask, such as, sharp, frayed, fuzzy, angular, curvilinear, etc. create interference, but offer qualitative change. The edges of the frames, such as, inward or outward chamferring, angular or ‘stream-lined’ rounded profiles, strongly vertical or horizontal emphasis, etc. provide a sense of enclosure. Masking and Framing, have some overlapping functions and serve complementary functions.

Masking and Framing, have been elements of imposition to alter the conditions of the openings. Both have a secondary role of structural support. The structural support becomes real when these are integrated with the openings’ system. But the treatments may remain superfluous impositions. Such impositions include LED insertion within the glazing, or over the surface projection of images (like speech readers used by anchors). Masking and Framing, are made antithetical. These are now eliminated or diffused for simplicity, clarity, minimalism and even delusion.

Masking has to be a smaller entity than the opening, for it to be meaningful. Masking is inhibiting or a restrictive element that resizes the opening and so controls the view, passage, effects of environment. Masking is both, planned and incidental. Planned masking offer superior conditions and perception, whereas incidental masking has surprises and new lessons. Openings are intentionally masked by architectural elements, items of furniture and furnishings, occupants. Openings get incidentally masked by growth of plants and trees, neighbouring buildings and environmental conditions.

The sizes of openings are affected by the depth aspect. Visual depth induces a perspective view. Wherever the sides are visible, add to the extent of a visual surface, and creating a frame within frame view. Imposed architectonic elements shield the opening with shadows that are more articulated than the original shadow casting elements. This overshadowing is a type of masking, reducing the apparent size opening. Similar effect occurs with deep-set and square-edged openings.

The framing, however, became really dominant with the chamferred sides, sills, ledges and lintel bottoms. The chamferring of edges enhances the depth aspect of the opening. It adds to the extent of a visual surface, and creating a frame within frame view. The chamferring increases the view of exterior from inside, and if on inside face, it adds to perceptual illumination.

Framing of opening mainly occurs as a surround element. But the surrounds are rather too thin as jambs, and so need casing and architraves for emphasis. Reshaping of openings in the frontal plane was tried with pointed arches in Gothic period. Real reshaping of the openings and curvilinear bending was tried out in the Baroque and Rococo architecture. With the reshaping and curvilinear bending of the openings, the architectural walls were also reformatted.

In Art Nouveau style, the openings were reshaped, and to heighten that effect, masking grills were used to de-form the rectangularity. The openings, with some restrains, and the grills, with complete abundance, used free flowing asymmetrical forms. To this vocabulary, glass patterns by way of frosting, etching, grinding and stained colouring were added.

Early glass for windows was produced as cut bottom of a bulb or cylinder. These had residual ripple patterns, imparting a fuzzy view. The defect was subdued by masking it with translucent sheer curtains and by framing it with a grid of muntins and mullions as in Colonial sash windows.

High quality modern glass has extra ordinary surface gloss, making it a mirror like a surface. The glossy glass if placed on the edge without sun-shading reflects the surroundings, and also reflecting sunlight as bounce-back, causing a nuisance to neighbouring properties and blinding with the glare the moving vehicles. This is now being controlled through building regulations. The solutions are masking the glass with polymer films or polychrome treatments.

Openings are occluded by stationary and mobile objects that manifest on the inside and outside. Objects occluding a brightly lit opening are seen as silhouette or outline. A person sited against an opening can see gestures of others, but in reverse direction others fail to perceive the expressions and ignore him/her. For correct modelling some illumination or reflections from other sides are required. But this can also happen if the object has multiple planes oriented differently. The scale of occluding objects is its absolute size and relatively the distance from the opening as well as the perceiver.

Framing and Masking, have relevance of nearness. The framing becomes irrelevant at closer distance. Masking for visual screening is more affective at a distance, but for illumination control, it is affective at all distances. 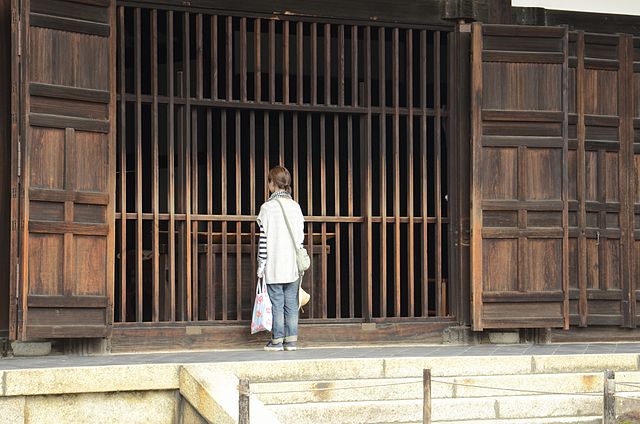 Masking is an overlay over any opening like a window, door or gap. The overlay could be an additional system, opportunistic exploitation of surroundings, or an arrangement of perception. The masking of opening is a facilitation through transitional delay in time and space creating partial or complete disguise through shielding, blurring, selective camouflage or obscuration. Functionally, transitions through the openings are controlled, directed or curtailed through with use physical elements and effects are added or subtracted by sensory processes.

Primary masking occurs, on how an opening is framed within a barrier system. The opening occurs as a cut, puncture, or cleavage within a barrier, or at the overlapping edges of two barriers. Masking becomes effective with the scale of the opening in comparison to the size or extent of the barrier. A smaller opening and an extensive barrier, both create an ’imposing’ framing’. The framing of built openings need a heading or lintel, and to support the head and super structures, sides are abutted with additional structures. Such side structures or portals add to the framing of the opening. Built opening require controller of transitions like ‘shutters’, and these require jambs, frames or stoppers. In arched and angled portals, for functional reasons door framing structures are square headed, creating shape-masking. The shutter devices have some technological limitations like a door cannot be two wide, or else it sags or deforms. It cannot be too extensive in size as the wood or metals did not permit very large shutters. These factors imposed scale-masking.

Natural and built gaps gain importance on what view they frame. The view could be the rising or setting sun, a mountain range or valley beyond, a water body, or a plaza, street or roof tops. Where such views are not straight aligned or perfectly frontal, the viewing position is architecturally adjusted or furniture layout is attuned to it. The view curiosity is build up by denying the view till one arrives at the perfect place. The masking of view out or inward is done through real or make-believe depths formed by repetition of series of identical, receding or increasing frames. Such multiple masking frames occur in colonnades, corridors, passages, avenues and walkways.