A front door is a normal entrance and opportunities arrive from it, but a back door is a nominal exit for the luck to run out. A locked front door means missing the opportunities, but an open backdoor mean someone is stealing your secrets. Front doors have protective deities (dwarpal-Hindi), so evil spirits know that this has many possibilities. Back doors do not need a door-guardian, as gossip mongers, never leave it alone, even for a while. Gods may close one door to open another. In Hindi it is said ‘Khuda chappar fadake deta hai’ meaning ‘if God is willing, gives by breaking the roof’. So God does not need an open door invitation to come to your place, but Christ expects, ‘I am the door,’ and ‘no one comes to the Father but through Me.’

A door involves a change of state. It offers hope, new life or fresh beginning from the wilderness, but may take one into an unfamiliar realm. On entering a door one achieves a communion with the creator, but most spiritual leaders had to go out of it for the Nirvana. At mundane level, the door illuminates and ventilates a space. It provides visual engagement, but also causes social interference, intrusions, acoustical disturbance and penetration of pollutants.

Mahadeva Temple at Itagi (or Ittagi) in the Koppal district of Karnataka state, India from Wikipedia Author Dineshkannambadi

A door leads from one space to another space. It should have dual expression of the interior as well as the exterior. The closed or false door of the burial chamber has a hypothetical reality of another world. The exterior or beyond the false door, life manifests as supernatural, unpredictable, full of dilemmas. And to contrast it the chamber interior is made with rich ways of life, virtues, good manners, exemplary behaviour and abundance. Temples and other religious places have elaborate door faces. The doors’ motifs, each represents a microcosm of divine life. There are doors within portals, where one can enter, but unlikely to escape.

In real buildings a door leads you to other doors. But such halls or vestibules can have few doors leading out. Corridors offer long rows of doors. The doors in corridors, unlike their counterpart in halls, always remain closed, and are full of intrigue and enemies lurking behind. That is the reason why Romans expected every honourable citizen to keep the doors open. An open street door showed a willingness to serve the community participate fully in political and social life. A place of concealment was a place of potential revolution. To keep the doors open and still have some visual privacy the doors were buffered with depth, fauces and atrium. The family members, neighbours and other regular visitors however, used a simpler side or back door set flush with the street, but left ajar. The front entrance door was a decorative entryway flanked by half columns or pilasters to create a picture-like frame. It was without a guard, except drawn or a mosaic motif of a dog. ‘In Roman culture, the front door was always open to a stranger and community but to understand and be treated equal to the family, one had to approach from other means’. 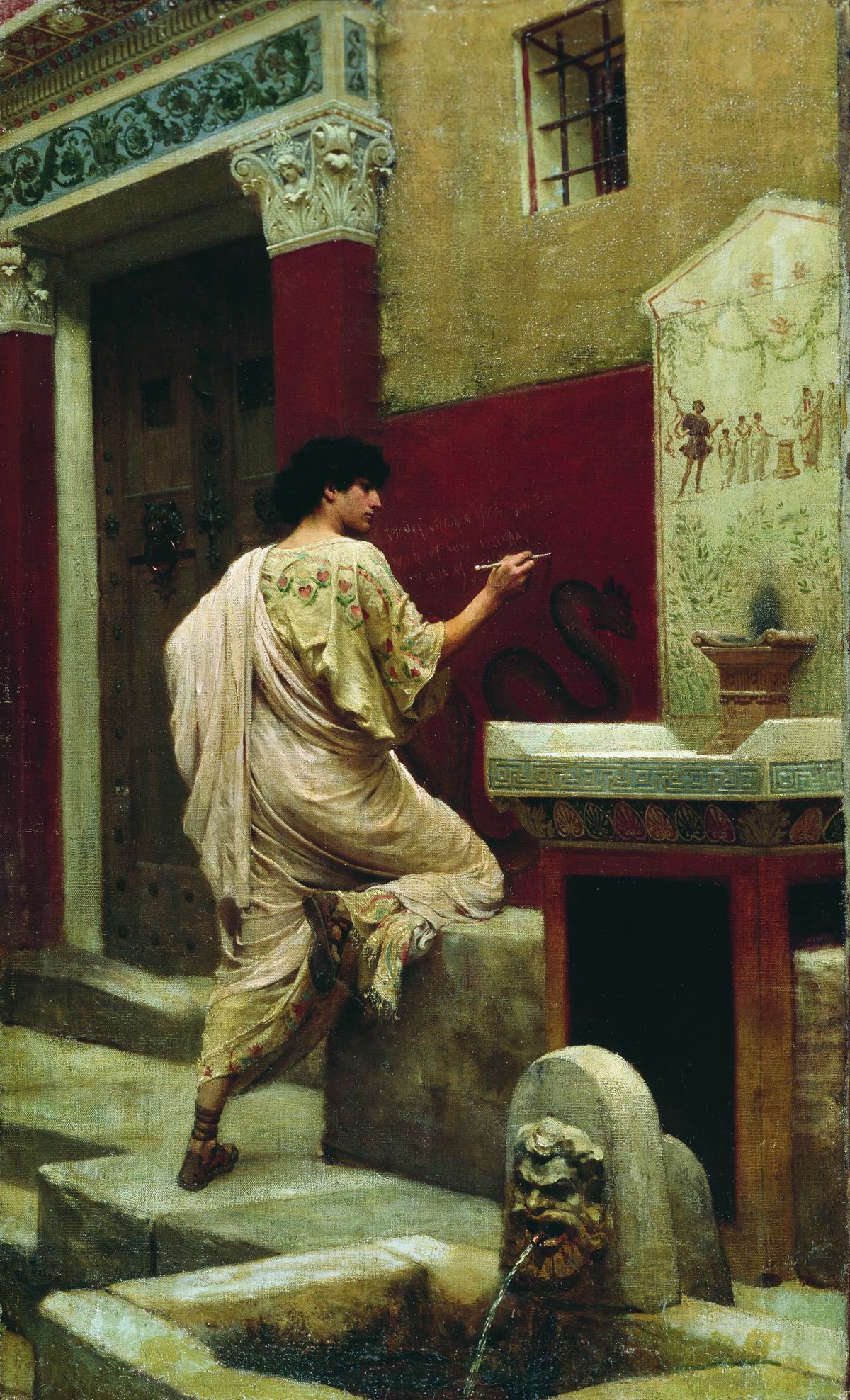 Early doors were pivoted, and usually without a door frame. The architectural masonry sides provided a portal like framing. This masonry framing acted as a stopper for the pivoted shutter with opening inward or outward. But a door opening outward or inward, has been judged differently. A door opening outward may show that one needs to be more accessible to others. However, an inward opening door may represent the desire for inner exploration and self-discovery. Roman houses had doors that opened inward. Roman society permitted only rare individuals of high honour to have doors that opened out on to the Street. Plutarch wrote that the Romans complimented Marcus Valorous, a founder of the Roman Republic, was allowed a house with doors opening outwards as perpetual recognition of his merit.

Drawing of a typical roman atrium house. From Wikipedia by Author Tobias Langhammer

For the Japanese, ‘the door to happiness opens outward. A door simply imposes itself upon the room when it opens inward. Having the door open inwards has the outside intruding upon the inside’. Feudal schools of etiquette prescribe all kinds of norms for opening a door and coming into a room. Sukisha, well-bred people use the hand, nearest the door to open it a few inches (the length of a forefinger, to be exact) and then switch hands to slide it back the rest of the way. A man is judged by how he opens a door and a woman by how she shuts. This is so because in a room with a group of men, a woman served the food and take a leave. A woman would be observed closing the door behind her with grace. The balanced and graceful action of folding down on one’s knees on the floor, moving into a room, keeping at a level equal to others already in the room, were part of larger ceremony. The skills of opening and closing a sliding Japanese doors are part of reishiki, proper form or etiquette.

There have been doors that have defied the explicit facility of inward-outward opening. The sliding doors did not impinge the exterior or interior space, nor did they force a person to move backward. The saloon or bar-doors were half shutters, moving both-ways. In US the revolving doors were marketed with a lot of hype, as ‘doors that always remain closed’.