Ramps are inclined passages for smooth transfer people, vehicles and goods between elevations. Ramps have a pitch lower than stairs, and are physically easier to ascend or descend than stairs. Ramps occupy more floor space compared to any other gravity transfer system.

Ramps require less force than lifting a load straight up though at an increase in the distance moved. An inclined plane allows the same work to be done with a smaller force exerted over a greater distance. A ramp is an inclined plane, one of the six classical simple machines defined by Renaissance scientists. Inclined planes have been used to move up an object along its inclined plane or by for lifting loads straight up from wells and mines. Indian leather water bags (mashaq) were pulled up by bullocks moving down a ramp.

Inclined slopes as simple machines have been used in many different conditions. A wedge is an inclined machine. A screw, is an inclined narrow spiral wrapped around a cylinder. Inclined planes have been used by people since prehistoric times to move heavy objects. Heavy stones used in Stonehenge or Dolmens were set in place with inclined planes made of earth. Egyptian pyramids, Ziggurats and Inca temples were constructed with inclined planes. Greeks constructed Diolkos, a paved ramp 6 km long, to drag ships overland across the Isthmus of Corinth. Ramps have been used to move heavy guns to fortification tops, to negotiate hills and mountains, and to draw water from wells and minerals from deep mines.

Ramps have been used to move a mass of people in public buildings and places. Ramps have been used by Le Corbusier as an indicative of democracy and ceremony. Ramps are used in place of stairs or steps. Wheeled items like trolleys, perambulators, chairs, vehicles are easy to move on ramps than stairs. 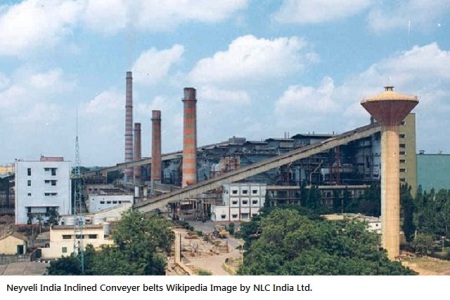 Inclined slopes, using the Earth or soil’s capacity to remain stable in inclined form has been used for constructing causeways. The stable angle of friction or angle of repose, is the maximum angle at which a soil mass remains stable and ‘at which loads can rest motionless on an inclined plane due to friction, without sliding down’.

Ramps when steeper than 10 %, require a non slip flooring and a grip-able handrail. Ideal pitch for a ramp is below 8.33 % (1:12), however most codes accept pitches up to 16.66 %, some labour laws allow 25 % pitch for very short runs (2mts). Ramps for wheel chair users and patient trolleys should not be steeper than 5 % (1:20). Length of a ramp must not be more than 6 mts, after which a break in gradient in the form of a level landings or rests should be at least 1650 long. Straight line layout of multiple ramp units (even with adequate provision of mid landings, must be avoided, instead a secondary ramp unit at right angle or U turn is advisable. For physically normal users, a ramp, per lap lengths of maximum 25 mts or 2 mts climb, are ideal. Width requirements: for single lane traffic 750 mm, furniture passage 900 mm, for drama or cinema aisles minimum 900 mm, increasing 35 mm for every 1500 mm of run.

Continuous ramps tend to accelerate the movement speed in descent and so become hazardous. Multi-directional ramps require additional elements to cut-off descent speeds at the change junctions. Circular ramps generate concentric force during rapid descents. Circular ramps of clock-wise or counter-clock movement have relevance (if any) in either the decent or accent.

Factors that define the utility of a ramp are: Texture of the floor, gripping power of the handrail, height of the handrail, distance between two handrails (in narrow ramps), configurations of the ramp structure, angle, movement to ascend/ descend, age profile of the users, orthopaedic functionality of the user, etc. It is very difficult and hazardous to move on a ramp with any type of hand, shoulder or head loads (railway porters), as the weight disturbs the nominal centre of gravity of the body. This is the reason why people stoop forward while climbing up steep slopes, and backward while moving down a ramp slope.

Ramps along with steps provide a dual system, however to match the gradient of the ramp, such steps have a wide tread and very low height riser, making them very difficult to use. In hospital areas such steps between or on one, or both sides of the ramp help the person to push the chair or trolley up or down the slope with better control. The same configuration is used in industrial warehouses to move large barrels or wheeled items. Ramp and stair combination is also used in inclined elevators often called a funicular railway. The slope accommodates the rails or the guides of the inclined elevator and the steps are used by the service personnel. Here the gradient is usually very acute so the tread is very narrow while the riser very tall. 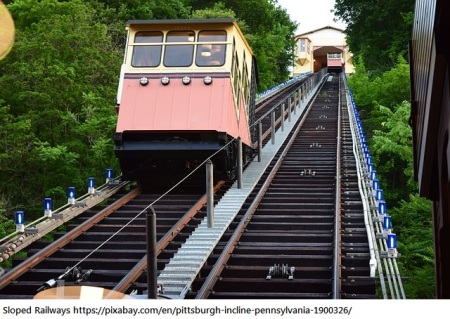 Parabolic ramps are used in places like Amusement parks, water games parks etc. A parabola has two sets of inclinations. The short radius curvature of the parabola, if at the lower end, helps in retarding the speed of descent, while the larger curvature of the parabola, if at the lower part, the initial acceleration gets a sudden boost at the end. This later version is very hazardous, and is used if only sufficient fore space or speed absorption mechanism (sand pit, water pool) is provided for beyond the parabola. Ice-skating tournaments where a skater needs very high speed start to accomplish the required twists, turns, lump before landing, have such slopes. A roller coaster rides makes extensive use of ramps structures to create very intensive centripetal and centrifugal forces with high accelerated speeds that almost defy the gravity. Cycling Velodrome uses double curvature ramps.

Inclined planes are widely used in the form of loading ramps to load and unload goods on trucks, ships, and planes. Wheelchair ramps are used to allow people in wheelchairs to get over vertical obstacles without exceeding their strength. Escalators and slanted conveyor belts are also forms of inclined planes. Aircraft slides and fire evacuation tubes allow people to rapidly and safely reach the ground.

Stairs are stepped and inclined foot-ways. Stairs’ ‘flights’ are point to point passageways, without any side connections (except at landings), so are very efficient transfer systems. Stairs, unlike corridors have no interfering mid-way entrants except at landings. The mid-way disturbance occurs in mountain side and very wide stairs where ‘cross (diagonal) ascent or descent’ occurs to increase the ‘tread depth’ of the steps. Stairs are shortest inclined passages but require some orthopaedic proficiency (capacity of the user to manipulate the legs and bend the body).

Rung ladders usually do not require additional handrails as the side members of the ladder can be used for holding grips. Rung ladders are often caged for safety, though such cages are more useful for ascent then for descent. It is safer to climb down facing the ladder. Swimming pools, water tanks, sewers have rung ladders. Manhole steps are very narrow in widths, but the width is otherwise compensated by its staggered placement. The same holds true, for climbers for bunk beds, whether in railways, buses, barracks or homes.

Ziggurats of Urnammu (2125 BC) are one of the oldest examples of ceremonial step ways. Egyptians built ceremonial stairs for a rock-cut temple at Del-el-Bahari (1520 BC). The Cretan palaces (1500 BC) had stairs that moulded the architecture. Greeks and Romans have exploited stepped-architecture for amphi theatres, stadia, thermae (bath houses) where the visual angle, support structure and curvatures in the plan were tackled.

In medieval Indian architecture bathing Ghats, Kunds and step wells had a distinctive element of planning. Kutub minar, Azan Minarets of Mosques, entrance steps for Fatehpur Sikri and Jama Mosque Delhi, show functional use of steps. Observatories, Jantar-Mantar, at Jaipur and Delhi have been articulated with steps. 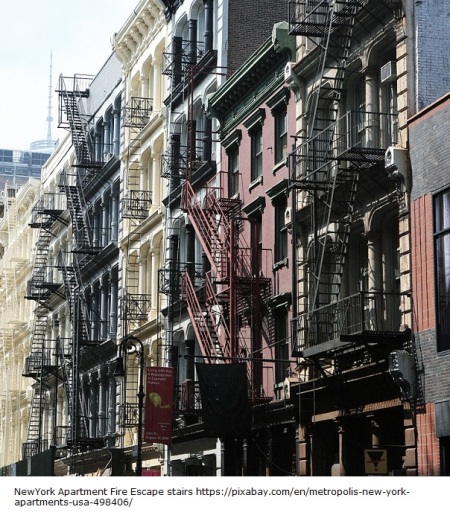 Romanesque period saw interior stairs and outdoor steps for entrances with converging and diverging flights on a common landing or a foyer. Spiral stair with a column or pier as the central element, often called Newel, were used in Gothic buildings. Later Gothic buildings had large diameter spiral stairs with an open central core. Post Gothic period stairs began to wind in many directions, had variable widths and curved steps. Renaissance stairs were extensively decorative, with balustrades, broad moulded handrails and statuette like newel supports at every start, turn and end. The stairs were not enclosed structures or staircases, but stairways as open structures. Stairs began to visually connect all the floors interim spaces. Stairwells or gaps, created spaces which were multi-layered and yet interconnected. Open or exterior steps became features of landscape design in plazas and gardens, such as in Villa de este at Trivoli, Scala di Spagna at Rome, Capitol at Rome, Kashmir Mughal gardens. 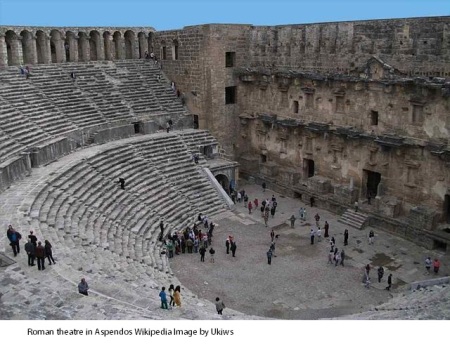 During 19th C new transportation system required for Ports and stations, and stairways became true transfer system for masses. Like stations, the stairways of large stores, auditoriums, assembly halls, served an identical function, of being visible. Stairs have a problem that one has to be conscious of climbing then enjoy the open space around. This was corrected in automated stairways as escalators, and later in open cage or bubble elevators.

A building has many types of systems such as openings systems, services systems, structural and non-structural systems, etc. Transfer Systems denote a very large group of subsystems used for transferring goods and people in various directions, levels and in different modes. These are intentionally facilitated by architectural design or naturally occur irrespective of the adequate provisions in the building fabric. 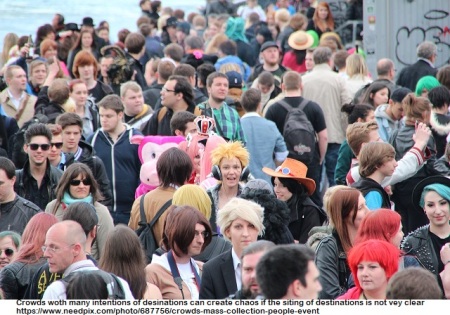 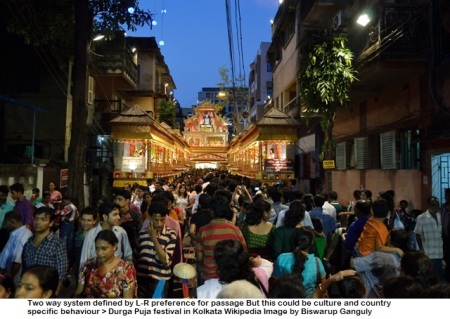 Transfer Systems mark the routes or spaces where concentrated or repeated movement of people and goods occur. Stairs, ramps, elevators, escalators, corridors, passages, bridges, etc. are elements or systems that can be identified as transfer systems. The transfer system denotes an exclusive one or the most efficient node available, leading to concentration of traffic.

The efficiency of a transfer system is determined by the fact whether the system is parallel, inclined or perpendicular to the gravity. The additional effort required to work against or towards the gravity, respectively retard or add to the efficiency. 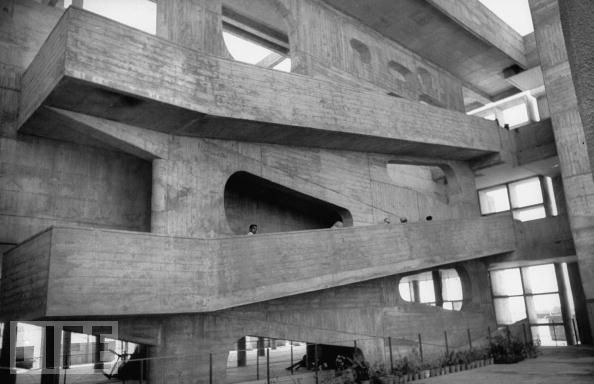 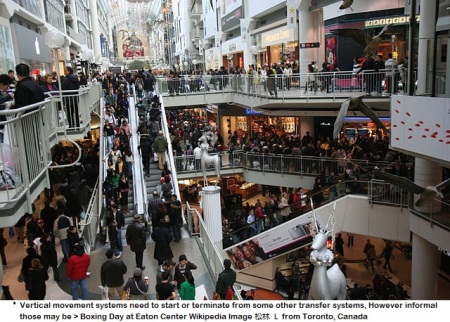 Transfer systems are open-ended or looped. Open-ended systems have finite start and termination points. Start-point is one where the first transferee element gets on the transfer system. The end point is one where the last of the transferee element gets off. It is also a point where another system such as the reverse, or parallel movement system begins. Looped systems are continuous systems and have no start-points or terminal points. Looped systems have a circular formation, or part of the segment is connected by straight (point to point) transfer system.

Circular spiral -but nor a looped transfer system

The intensity of transfer depends on whether the system operates continuously or intermittently. Continuous systems such as the escalators, automated walkways, are governed by the speed of movement, while the intermittent systems such as the elevators, buses, railways are affected by the frequency of movement’s module. Both systems however have a traffic capacity limitation.

In a transfer system, people move depending on two counts, anthropometric design of the system, and orthopaedic functionality. On other hand vehicles or goods modules are carried by use of external energy through mechanical devices. Variable capacities of the transferee also affect the speed of transfer, and as a result the intensity of traffic.

Transfer systems are disturbed when elements moving at different pace cause an unwanted change in the speed or direction of the general moving mass. Transfer systems become invalid when all goods and people reach their destinations, or when there is nothing left to transfer.