Wall structures have been prime structure for community purposes like, flood protection, irrigation, defense, terrain contouring and against erosion of land. These, perhaps preceded the walls erected for construction of dwellings. The builders from ancient times, were innately aware of the difference between a wall carrying side thrusts and bearing vertical loads. And accordingly the forms and techniques of constructions were different. The walls carrying side thrusts followed the natural angle of repose (the steepest angles at which a sloping surface is formed of loose material remains stable). The walls carrying vertical loads were designed with concern for lateral stability, and to a lesser extent worry about load bearing capacity.

The idea of a column, as a ‘zero-sized’ wall, (like the Stonehenge) and of pillars (obelisks) may have come from tree trunks. Wood scaffolds were used for painting tall cave walls and ceilings. A series of props or poles, were used as piles or spikes for quicker formation of linear structures, such as in under-water constructions, floods, wet soils, or support against sand like loose soils. 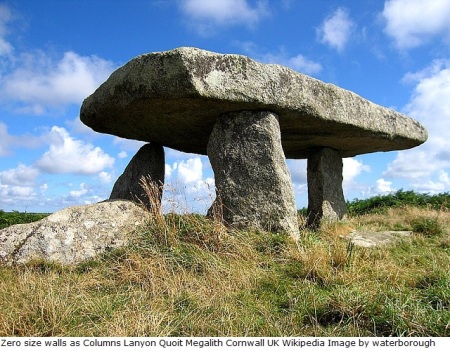 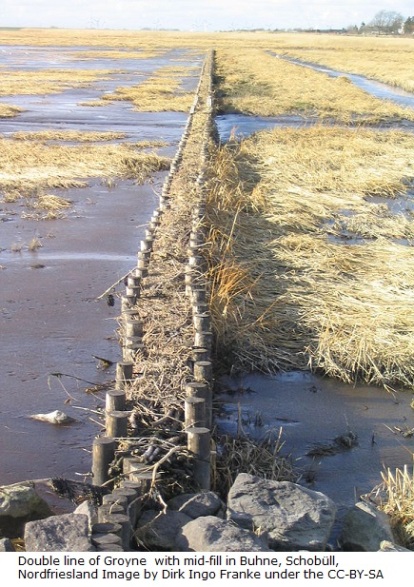 Earthen Wall structures for embankments or dams, for water flow regulation, storage, prevention of land erosion, against flooding, access-way (road) construction, for irrigation or navigation channels were constructed by combination of deposition or cutting-dressing. But the skill rested in exploiting the existing contours of the lands. Such structures were large and affected the entire community. For participation of large number of people, clear perception of the project and its benefit was necessary. It is apparent that such projects were executed during certain season. These were continuing efforts as added upon and improvised by several generations. Such lasting efforts can occur in societies that are politically and socially stable. 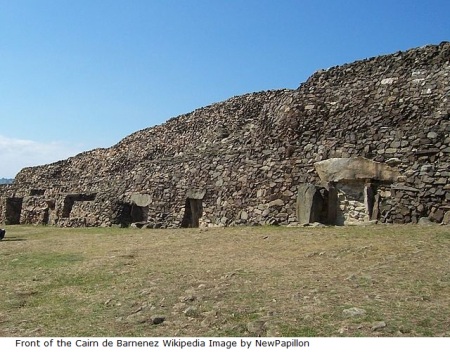 Other walls were erected in the form of city-town walls to protect the community, and monumental structures related to burial facilities. These walls due to their extent gave impression of monumentality, and were gravity-stable and invincible forms against the invaders or marauders. Walls defining passageways are for land mass retention and ceremonial demarcation of walkways. Town walls and monumental walls, both were not ‘load-bearing’ structures. Both also related to access by large number of people, often in processions. The inevitable entry point was well marked in scale and position-location. 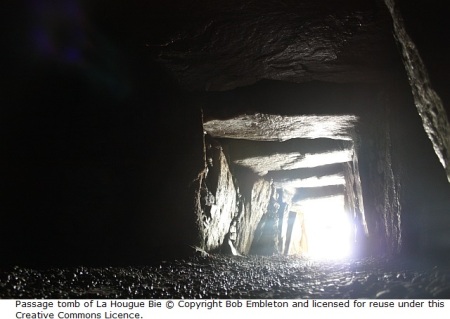 Protective walls were often constructed as tall fences. These were made insurmountable by various means like an enhancement of height-width factors. Width was increased by forming a ditch on the face of the wall, and height was added by constructing the wall over a natural steep edge of terrain. City walls in some areas were constructed of tree trunks or wood lattices.

A palisade, was a defensive fence (also called a stake-wall or paling) formed around the military camps by Greeks and Romans. It is formed of wood stakes or tree trunks placed in a line. A groyne is a similar, but low height wall structure, a hydraulic entity for interrupting the free flow of water and restricts the movement of soil-sediments from coastal area.

A levee, dike, dyke, ditch, embankment, flood-bank or stop-bank, are naturally occurring long ridges or artificially constructed walls to regulate water. These are usually of stone and earth, and follow the course of a river. Levees and other structure require constant care by organized society. Some of the earliest levees were constructed by the Indus Valley Civilization (2600 BC), Egyptians to manage the floods of river Nile, in Mesopotamia and China. The word Levee or F. Lever, literally means ‘to raise’. 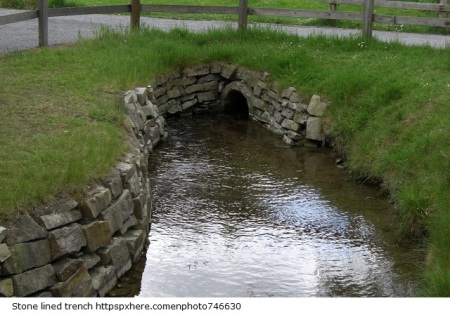 The word Dyke (dijk) indicates, both trench and bank for water management. The word Ditch derives from dic, dick or dig, meaning to digging a trench and raise the banks with the excavated soil. Such earthworks acted as horizontal walling to deepen water channels, enhance the flow-rate and water carrying capacity. The water channel shaping by the side walling structures provided reliable lanes for waterways. These wall structures were formed to reduce the erosion by water flows, waves and winds.

The first dikes and water control structures were built and maintained by those directly benefiting from them, mostly farmers. As the structures got more extensive and complex councils were formed from people with a common interest in the control of water levels on their land and so the first water boards began to emerge. These often controlled only a small area, a single polder or dike. Later they merged or an overall organization was formed when different water boards had conflicting interests. The original water boards differed much from each other in the organization, power, and area that they managed. The differences were often regional and were dictated by differing circumstances, whether they had to defend a sea dike against a storm surge or keep the water level in a polder within bounds. In the middle of the 20th century there were about 2,700 water control boards. After many mergers, there are currently 27 water boards left. Water boards hold separate elections, levy taxes, and function independently from other government bodies. -Flood control in the Netherlands Wikipedia 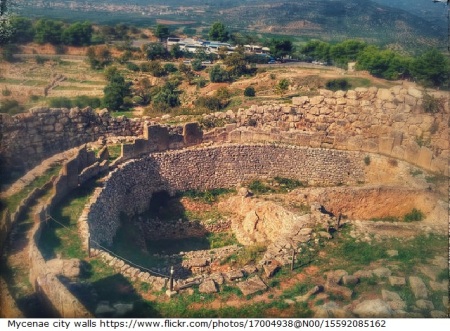 City walls are elaborate ‘fencing structures’ built from stronger materials to fortify a territory. The fort walls were symbols of power, so the scale was grandiose. These walls were planned at most select location, adding upon whatever natural defence features were available. Appropriateness of the site also rested on logistics of supply, of which food-fodder and drinking water, even during seizure condition, was very important. Forts housed a populated community and to sustain it, also included structures for defense preparedness and for offense capacity like ditches, gates, embankments, watchtowers, crenelation, etc.

A moat is a ditch or long pit around a settlement with or without a fence or fortification. Moats were created by reforming the existing terrain features, or dug as a new one. Fortified structures, like castles were once sited over difficult terrains, where some natural features such as hills, elevated lands or rocky landscapes were available for some protection. Moats were additional defence provisions, formed at vulnerable spots. The difficult terrains, however, make it difficult to reform existing terrain, or excavate a new trench. Digging a moat was not only labourious, but the management of the excavated material equally difficult. The excavated stuff was used to back support the fort walls, or raise the level of internal grounds. Moats were formed along with construction of fort walls.

Some of the earliest defensive walls were linear formations and not any surrounding or enveloping forts. These were long barrier walls with open ends or terminating into hillock or large water body. These linear walls marked a territorial edge or boundary of the kingdom. Such edge walls had to be very extensive to be effective.

Sumerian King Shulgi of Ur, 2038 BC., built a wall that was 250 Kms long, between the Tigris and Euphrates rivers, to keep the invading Amorites out of Sumerian lands. Great Wall of Gorgan (restored and renovated by the Sasanian Persians in the 5th or 6th C) was 195 Kms long, and included more than thirty forts along its length. Great Wall of China was built as several small independent units, possibly first at vulnerable points, which were ultimately joined together during the Ming Era. It was as a freestanding regional scale defensive structure. Similarly the Anastasian wall (the Long Walls of Thrace) of the Byzantine Empire (469 C) located in modern Turkey was also not anchored at either end to any terminus. All such walls proved to be ineffectual as enemy army marched around the ends. The most known wall structure, Hadrian’s wall of Britain was built by Roman Emperor Hadrian (122 AD) to prevent frequent incursions.

Roof and floor systems are called elements mediating across the load-bearing systems, such as walls and beams. Roofs by themselves may transmit the load, such as in Flat slabs, Shell structures, Domes, etc. Roofs can take various shapes, but Floors are flatter and only occasionally slightly inclined. The distinction of floor and beam or wall may or may not be very apparent. In some structures both are well integrated, so act coherently (e.g. waffle slabs). In other structures the identity of each is distinct yet they may operate interdependently. In assembled structures the components are independent, and easy to identify (a stone plate on a wall is simply supported). In cases where the structural support system and covering elements are integrated, the stress transfer is very efficient. This also results into a system that is lean and lightweight, when compared to system of independent (simply supported) components.

Covering elements in Compressive roof systems are composed of stiff materials. These elements have a comparatively substantial thickness in proportion to the span. The thickness requirements vary depending on the composition of structure and the stress resistance of the material, the shape configuration of the covering element, the mode of stress transfer (across or along the section) and the end (support) conditions. 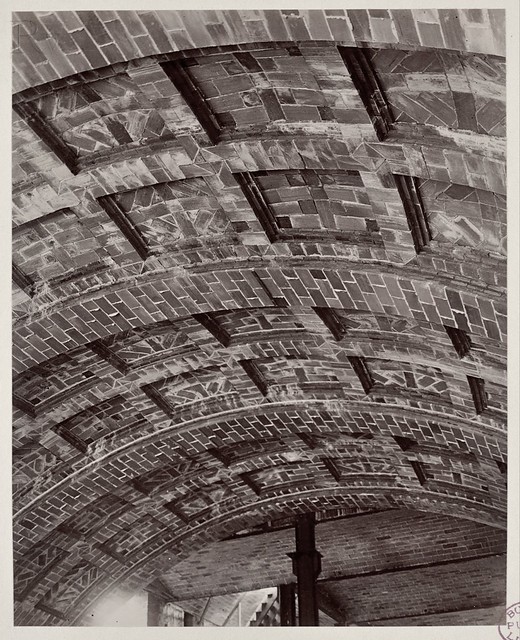 Covering elements in Tensile roofing systems are composed of stiff or flexible materials. The later have very small thickness in comparison to the size of the span. The material being very thin and flexible takes on the shape the way it is stressed to, and also depending on the gravity induced stress forms (catenary). Covering elements of a roofing system, when pre-stressed (usually pre-stretched), show greater resistance to various stresses.

A transparent roof cover material that would allow light and permit vision through was a dream, that every builder tried to realize. Romans used small glass disks inserts for roof illumination. Gothic period saw tall perpendicular windows almost merging into the roof. Paintings and murals with extensive skies as the theme were painted on the ceilings. However, it was the Conservatory at Derbyshire in 1836, Crystal Palace at London in 1850, both designed by Paxton, and the Palm house at Botanical Garden, Kew in 1845, designed by Burton and Turner, the dream of a transparent roof was realized. Transparent roofs are now made of acrylics and other plastics for solarium, green houses, passive solar heating systems, etc. Kenzo Tange designed the Japan Olympic stadium roof as a catenary – flexible structure. French museum Louvre at Paris has an extension wing with a glass pyramid.