The word Trellis derives from trilicius, (tri- + licium = thread), referring it to a woven entity ‘with three threads’. A trellis in old French as treliz simply refers to a fabric of open texture. Basket or matt weave is interpreted as construction where two or more threads of grass, weeds, vines, twigs, bamboo slivers or green cane slip are used in both the warp and filling direction. And so Trellis may have meant an open-mat like weave. These may have been used as screen cover over the gaps or openings like doors and windows, to prevent entry of stray animals rodents, flies, and mosquitoes, to reduce the pressure of heavy winds, or, control the brightness.

Matts have Three forms, soft ones have no edge reinforcement and so can be folded in either of the direction. Matts with reinforcement at the ends (usually warp ends) can be rolled up after hanging, whereas with stiff support on all four edges, it forms a panel. Trellises are referred to “as panels, made from interwoven wood pieces”.

Treillage is French word (Middle French, from treille or vine arbor) for latticework used for supporting vines and green foliage. Lattices have been used in agriculture for supporting plants, and protecting them in inclement weather. During Renaissance period lattices were key elements of garden scapes. These were used for gates, fences, tree guards and as support structures for pots and vases. For garden scapes metal trellises replaced the wood trellises, post-industrial age. A metal structure gets very hot and fast, burning out the climbers or plants, so wood has continued to be a compulsory requirement.

Cheval de frise, a medieval latticed defense for anti-cavalry measure with many projecting long iron or wooden spikes or spears.

Lattices are architectural as well as interior space elements. These are of essentially of Five types.

1 Protective lattices against height related hazards, within openings, spiked one against unauthorized entry, and as spark arresters in fire places.

2 Space dividing elements such as fences, guard rails, reja (screens to enclose a chapel or a tomb in a church), partitions, and as a translucent barrier. Indian balconies, Zarokha and Mid-East countries traditional window form, Mashrabiya, use grills to occlude vision from outside and as a sun shading device.

3 Roofing elements are called Pergola or roof screens. Indian urban houses in crowded localities have central open cut spaces called Chowk, and these are covered with a lattice structure at every floor level. These are used for seating, sleeping, craft work, drying clothes, etc. besides providing lighting and ventilation to every floor. Pergolas are used to control the illumination and cutoff sunlight during specific daily and seasonal schedules.

4 Flooring elements of lattices are used in walkways and catwalks of warehouses, performance stages. Floor lattices in doors screen dust off the shoes soles. Floor lattices do not allow cattle to enter or leave an estate. 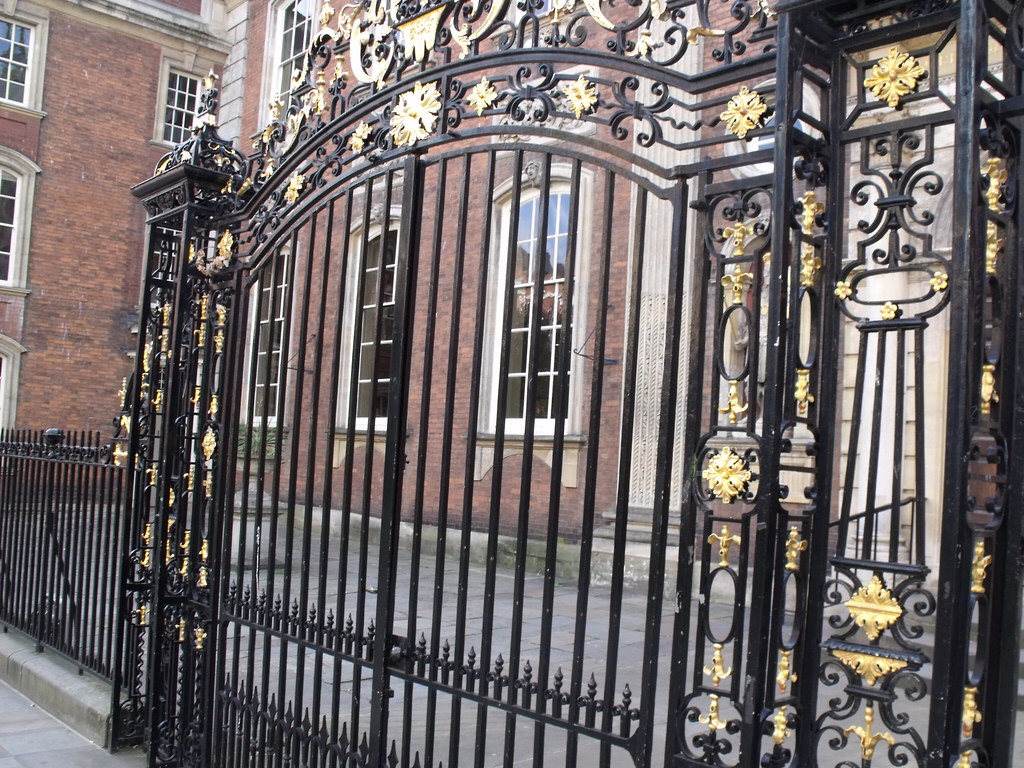 Grills are primarily protection devices in openings, but have been used as an ornamental element. Grills are placed in apertures, windows, doors, other gaps and also over walls. Grills are used barricades such as the as parapets on terraces, in balconies, galleries or at the edge of any elevated level. Grills are also used as transparent divider on roads and as estate boundaries. First grills were just heaps or stacks of twigs or thorny branches against any trespass-able opening. Fixed grills were created by or inserting wood sticks into the sides of the openings.

Grills of stones or trellis are created in buildings. These Jalis provided protection and privacy. Metal grills of Bronze and Cast steel provided unbreakable and thin body material. The metals were shaped by casting, forging, bending and joining.

Grills of metal began to reflect the artistic fantasy, almost as close to a sculpture, mural or painting. It was possible to create many a different pattern. Grills had simple linear patterns of geometry as well as floral compositions. The lines of the composition were moulded into a planner (2D) or cubical (3D) profiles, by infinite sectional variations. The profile variations made the grill visible in different forms from different view angles. Grills themselves were initially planner elements, but now began to be moulded to form multi-curved surfaces and multi lateral 3D configurations like sculptures. A well-designed grill can be ornamentation yet be a functional entity.

A predominantly vertical configuration in a grill pattern expresses a masculinity, heavy or solidity, and looks over bearing. It obstructs the vision through it. Vertical configurations in grills are psychologically associated with an enforced confinement or jail.

A predominantly horizontal grill pattern allows restricted, but wide horizontal level of vision, and so seems less masculine, solid or imposing. Horizontal patterns are too dependent on their surrounding elements to be effective, and as a result need lots of design co-ordinations.

A curvilinear or floral pattern looks effeminate. Such grills arrest the vision into themselves, and so survive on their own. However, such patterns tend to be symbolic representations, and may seem out of place in any other context.

Grills are used to soften or harden the effect of other architectural elements. A semi circular stone arch bereft of any carvings or appendages can be made to look softer and less dominant by a suitable grill pattern. Similarly a flowing pointed arch or multi curved arch with flutes etc. can be made little more over bearing or imposing by geometric patterned grill.

Grills are used to divide very large open faces or gaps into visually manageable sections. Grills over Chowk areas in old Delhi and Northern India houses are used as walkways for accessing rooms across the Chowk and also for sleeping and drying clothes.