A point is the beginning of geometrical order, and the line extends the same. The point connects to another one establishing the extent (depth), and direction of the relationship. There were many types of points, a real end like of needle, spear or arrow head, a distanced object perceived as of zero size like a star or Sun, and an emblematic one like the gravity as the chief focal point of Earth. The observer is the pivot of cognition.

Historically geometry was the relationship between the earthly points (terrestrial locations) and the celestial objects. It has also been about the connect, between ‘me and other things’. Geometry is about relationships between ‘features and the orientation’. It is about recognizing a pattern out of random, and define it for perpetuity. 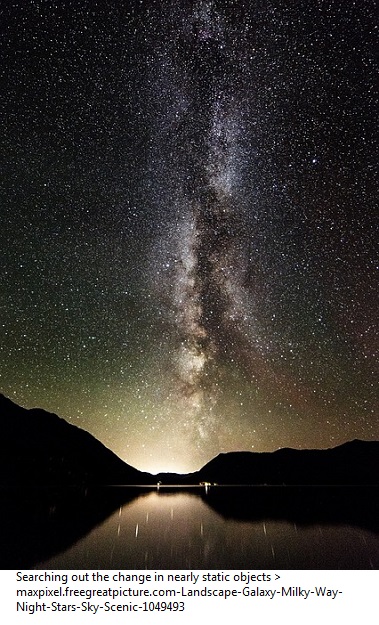 Geometry (from the Ancient Greek: γεωμετρία; geo =earth, and metron =measurement) is concerned with sizes, shapes, relations of objects, and the attribute of space. A person, who can define-locate objects is a geometer. Geometry was the basic measurable realization of the body limb sizes and work capacities. One of the earliest interests in geometry was land measurements or surveying.

“Geometry will draw the soul towards truth, and create the spirit of philosophy –Plato.” Over the doors to Plato’s academy were the words: Let no one destitute of geometry enter my doors.

Geometry is of geo and metric, or earth measurements. Geometry discovers unmeasured areas by comparing them to areas already measured. Geometry is synonymous with self-knowledge, the understanding of the basic substance of our being (all measures ultimately relate to human body, its sizes and capacities).

The points are real, but the lines are ephemeral entities, construed to be series of points. Points exist in duality, and the connection between the two, is the allegorical line. The reality of line is its start, home or with us and so existential, but the end could be somewhere, and so hypo-real. Between the points of beginning and end, a line has a mid cross over by another immaterial line. This line is the axis across the threshold, forms the realm of this versus that side. 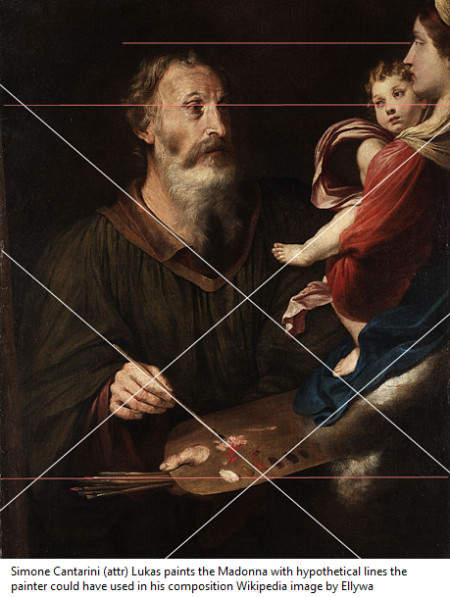 The duality of points, representing Earth and moon, Sun and star, Human and God, Sky and ground, Heaven and hell, Birth and death, form a symbolic reference in one direction, but not the two-way connect. The other end is hyperbolic, and one could not have been without the other. The emergent line, connecting two points, is however invested with another point a fulcrum. It is a value of balanced equality or proportionate inequality. The fulcrum relates to the gravity, so it is more realistic than the ‘connecting line’.

The original figure of Vitruvius was static more like a Vastu Purush figure of India. Leonardo da Vinci rotated it around the navel to form a circle, square and triangles, and balanced equality. Vinci figure accepted the universal positional truths -vertical to the gravity and parallel with the gravity. Corbusier’s Modulor confirmed the proportionate inequality. The fulcrum of balance was universal, though centred to a human belly button. The Modulor also reconfirmed the Vitruvian fact (spread of hand legs) that it is not the size, but the reach (with raised hand) that is sensorially important. 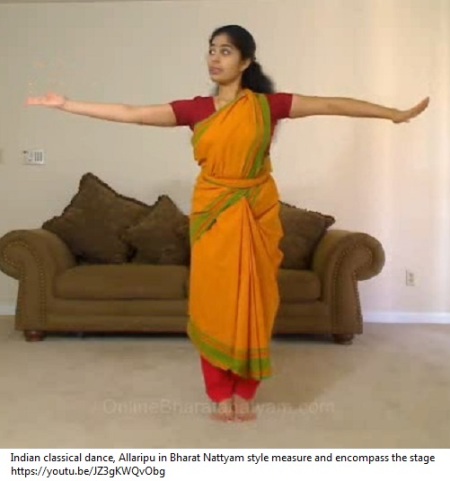 The reach is also the first enaction of Indian classical dance, Allaripu in Bharat Nattyam style. The dance begins as a warm-up exercise, where a dancer standing in the centre of a stage begins with movement of eyes, head, stretching of hands and then feet. This is as if to ‘measure and encompass the stage (or world)’ by front, side, and angle movements.

According to Indian traditions, a point is the Shiva, a Bindu where consciousness (all senses), converges, and from which creation begins. Bindu (centre of the forehead) is the focal point of all perceptions (like two eyes (seeing), two ears (listening), nose (aural) and mouth (taste), and the pervasive sense of touch) converge here to complete the cognition. Hindu ritual design of Yantra and Mandala have a focus. A Bindu is the portal, not an edge of a threshold, but a point. It is beyond or out of the mind, a realm, from where time, space, and causality manifests. Bindu means point or dot; the word is derived from the root verb ‘bhid’ or ‘bhind’, which means to burst, to break through. Piercing, breaking, or bursting through the Bindu is the last stage of attainment. A Bindu is described as the Void or Shiv (the Nucleus) suffuse with the Shakti (Electrons?). 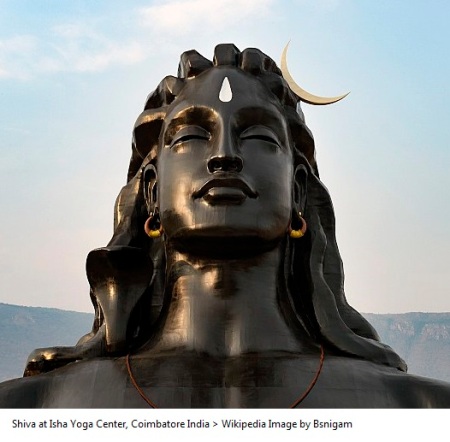 The prime purpose of geometry was to establish a relationship between various celestial and terrestrial objects. The relationship was a pattern to register the changes occurring in the set. The shape and size of terrestrial neighbourhood objects were important for occupation, possession and planning. Another purpose of geometry was to lay down the linear anomalies between two distanced (beyond the nominal means of perceptions) objects. The laying down process of celestial terrestrial objects was a process of abstraction through scaling.

There were two problems concurrent with the laying down an observed pattern. The reality of perceiving a pattern includes its third dimension, the vertical. Visualizing a domain in what we today know as orthographic projection was difficult. The Egyptian drew the human figures in multiple parts: Head, lower torso and feet sideways and upper torsos (neck to hip) in frontal view. This was an issue of ‘drawing or laying down’ a pattern, and not for modelling a statue. Statues were free of such dichotomies.

Early maps included all geometrically ‘measured’ as well as ‘learnt’ details. The later ones came from travelogue fables and folklore and ingrained in the psyche, and were used to fill-up the large empty mid areas, and seal the edges. 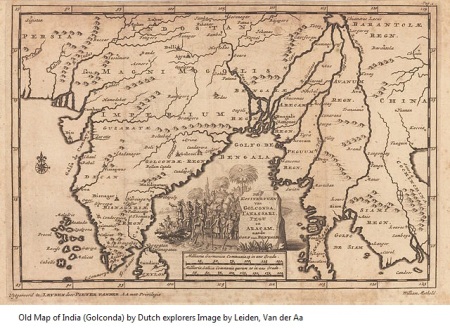 The sense of seeing has developed through Geometry. It was necessary for a laid down pattern to be truly measurable. An unambiguously measurable pattern or lay at a manipulable scale allows interpretation of the structure, its order or arrangement. This was not a new lesson for the masons or astronomers, because they were dealing with an existent reality. For architects and artists perception of a form in visual representation or perspective arrived after years of trepidation. This was the beginning of solid or spatial geometry.

‘Any objectivised or conceptual pattern, if it has a traceable geometrical order, that is the human endeavour’. The basic tools of the masonry are plumb, square, and level. Freemason cult places special emphasis on geometry to endow right-behaviour, rectitude, and truthfulness. –Free-Masons cult

The foundation of solids-based geometry occurred with Euclid. Euclidean geometry relies on two measurable qualities: angle and distance. The angle is absolute, and the distance is relative. The depths, directions and angles, together form a network or web of relationships. Euclidean space is a good approximation, only when gravitational or other forces are not in consideration. So the lines have a straight run, and perceptively run parallel. But beyond Euclidean realm, the lines (longitude) are affected by other forces, and bend or take a twisting route. Lines cross over or meet at an angle.

Crossing of lines at the right angle, or perpendicular was realized in several ways. Drawing a set of dissecting chords gives an accurate right angle on ground, but the ‘spatial’ perpendicular, going up (the sky) or going down (the well or pit), was possible through a plumb. To stretch the lines to celestial bodies, one had to be knowledgeable about the triangulation. Perpendicular was also a realization that there are cardinal directions.

The word chord is used for bow-string = jayb (Arabic). The jayb is a corruption of Sanskrit jīvā. 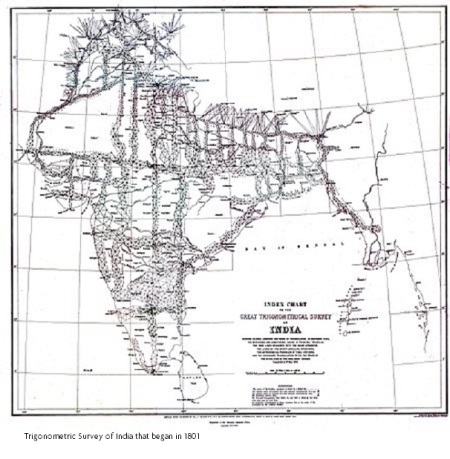 The Great Trigonometric Survey of India that began in 1801 measured through the triangulation entire subcontinent traversing all types of terrains. It was one of the first accurate measurements of a section of an arc of longitude, and for measurements of the geodesic anomaly. It named and mapped Mount Everest and the other Himalayan peaks.

The Crossing of lines was used to form grids, for laying of objects equi-distanced like Vedika for Havan, plotting for trees, Mandala for building layouts.

Geometry was an important tool for measuring lands, establishing ownership and for laying out linear works like walls of forts, bunds, roads and irrigation canals. Earliest maps were layouts of stars Maps and not lands. Star and Land maps, both were geometrical surrogates, because of the scaling factor and transfer visualization.

In ancient Egypt, ‘a rope stretcher tied to a point was used to reestablish boundaries after the annual floods of the Nile River’. In medieval Europe, village residents including youngsters would walk along the territories ‘to establish a communal memory of the boundaries’.

Earliest star maps are of dots dating to 14,500 BC found on the walls of the Lascaux caves that map out part of the night sky, including the three bright stars Vega, Deneb, and Altair (the Summer Triangle asterism), as well as the Pleiades star cluster. The Cuevas de El Castillo in Spain contain a dot map of the Corona Borealis constellation dating from 12,000 BC. 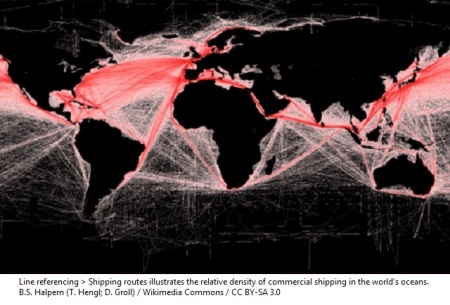 A line referencing system (LRS) defines measures from a point of origin. But lines like walls also have mid body relevance of a threshold. A threshold constitutes crossing right angles forming, quadrants each with two sets of values: Left or Right and Up or Below. By using Cartesian coordinate system, we mark a point by how far along and how far up it is. In contrast, by using Polar Coordinates we mark a point, how far away, and what angle it is. Coordinates system for astronomy are latitude, longitude and elevation. Such three-dimensional geodetic coordinates or geographic coordinates are used for marking a location.

Architects abrogate the form for a simpler surrogate like solid to plane, plane to a line and a line to a point. These surrogates, if required are compounded with side views. But with training and experience, designers read the latent dimension (and relevant details) even in absence of ‘side views’.