An alloy is a metal product with two or more elements as a Solid solution, as an Inter-metallic compound or a Mix of metallic phases. An alloy represents 90 percent or more of the chief constituent or ‘parent metal’ to which other substances or ‘alloying agents’ (metals and metalloids) are added. Alloy making today involves almost every metallic element of the periodic table.

Metalloids are chemical elements with characteristics between a metal and nonmetal. Metalloids can form an alloy. Metalloids have a metallic appearance, but they are brittle and a reasonable conductor of electricity. Commonly recognized metalloids are Boron, Silicon, Germanium, Arsenic, Antimony, Tellurium, Carbon, Selenium, Polonium, Astatine and Aluminium.

Substitution alloys: Here (such as Brass), the atoms of the alloying agent replace atoms of the main metal, when the atoms of both are of nearly same size. Both the constituents are near one another in the periodic table.

The most common way of forming alloys is to melt the components and mix them together. An advance method, powder technology, is to powder the ingredients and then fuse them using pressure and heat. A third method, called Ion implantation for making alloys is to fire beams of ions over the surface layer of metal items. It is widely used for micro alloying and surface alloying. Alloys are commonly described as a mixture of two or more metals. Alloys, can also be formed with metal and metalloid. Almost all metals are used as alloys, because these have properties superior to pure metals.

Alloying increases strength, hardness, durability, ductility, tensile strength, toughness, corrosion resistance and reduces costs. Arsenic, zinc, antimony, and nickel have been known from an early date, but only in the alloy state. By 100 BC mercury was known and was produced by heating the sulfide mineral cinnabar and condensing the vapours. Its property of amalgamating -mixing or alloying with various metals was employed for their recovery and refining.

Alloying processes: Nominally alloys are mixed from commercially pure elements. Alloys are made by melting the base metal as mixing is easier in liquid state in comparison to the slow and difficult process in solid state. Traditionally alloys were melted in open where the layer of slag protects the metal from oxidation. Alloys are processed by induction melting in a crucible; or through arc melting, where the melted metal droplets drip from the arc and cooled to solidify. For specific applications, requiring in-homogeneous, composite structure such as in cemented tungsten carbide cutting tools, the alloy is made by powder metallurgical method.

Alloys are used because of the specific properties or production related characteristics that are superior to pure metals. Historically the first alloy Bronze was realized for its extra ordinary hardness in comparison to its constituents copper or tin. Specialized alloys are used for dental work, body implants, jewellery making, craft work, electronics, and carbide tip tools.

● Bearing alloys contain particles of hard inter-metallic compounds that resist wear. Bearing alloy of bronze and graphite is created with controlled porosity so as to saturate with lubricant oil.

● Multi-phase alloy is a method of strengthening a metal by adding elements that have no or partial solubility in the parent metal. These secondary phases can raise or reduce the strength of an alloy. Pearlite is a good example of a multi-phase alloy within the carbon-iron family. 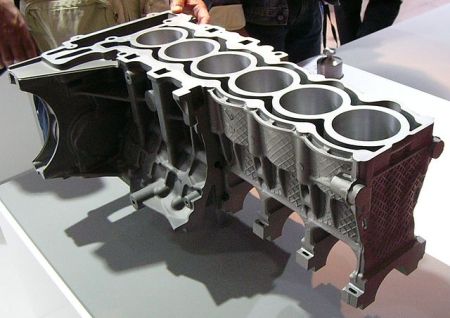 A die cast block of Alu. and Magn Wikipedia image by 160SZ (talk)

● Die-casting alloys have low melting temperature, and so can be injected under pressure into dies. These zinc or aluminium-based alloys are used for automotive and household parts.

● High-alloy Steels have lower proportion (less than 5%) of alloying elements to increase strength or hardenability. Larger proportion of alloying materials (more than 5%) are used for special properties such as corrosion resistance or high temperature stability. Substances like Manganese, Silicon, Nickel, Copper, Chromium, Vanadium, Molybdenum, Tungsten, Zirconium, Cerium, are added to achieve specific qualities. Stainless Steels contain 12% Chromium and Nickel. Austenitic stainless steels offer weldability but are not stable at room temperature. Such grades require addition of specific alloys to stabilize the austenite. Ferritic stainless steels have 12 to 27% chromium and small amounts of austenite-forming alloys. Martensitic stainless steels have the least amount of chromium. These steels have high hardenability, and require both pre and post heating for welding to prevent cracking.

One thought on “ALLOYS”